Since the 32-year-old Chinese announced in July 2011 that injuries had ended his eight-season career with the Houston Rockets, he became a university student and set up a wine business.

He also became owner of a professional basketball team in China, and finally, a little less than a year and a half ago, ha started a career in politics – becoming a member of an advisory body to Shanghai’s legislature.

Among 142 members in the group Yao is the youngest. The advisory committee does not have any real power, but  Yao is supposed to attend regular meetings, and can make suggestions for the advisory body and government departments. 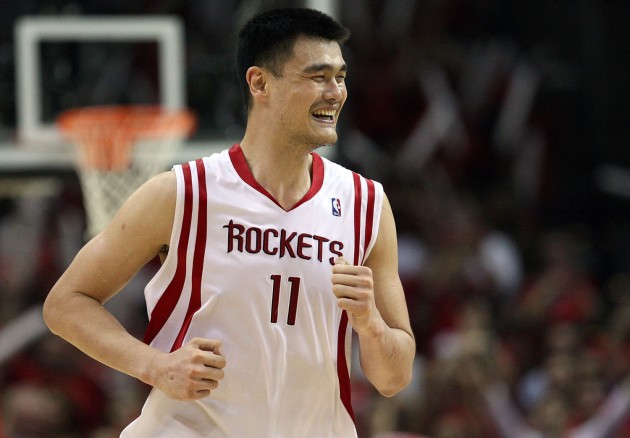 Yao, one of the most popular celebrities in China from his eight seasons in the NBA, is a student at Jiaotong University, one of the top universities in his hometown Shanghai.

In November 2011, he released the first-ever bottles of his new Yao Ming-branded wine, a 2009 Napa Valley Cabernet Sauvignon has been, at the time, available only in mainland China, where the market for imported wines has boomed over the past decade.

Yao Ming was born on September 12, 1980. At the time of his final season in Houston Rockets, he was the tallest active player in the NBA, at 2.29 m.

Yao, who was born in Shanghai, China, started playing for the Shanghai Sharks as a teenager, and played on their senior team for five years in the Chinese Basketball Association (CBA), winning a championship in his final year.

After negotiating with the CBA and the Sharks to secure his release, Yao was selected by the Houston Rockets as the first overall pick in the 2002 NBA Draft.

Yao was selected to start for the Western Conference in the NBA All-Star Game eight times, and was named to the All-NBA Team five times.

He reached the NBA Playoffs four times, and the Rockets won a first-round series in the 2009 postseason, their first playoff series victory since 1997.

However, Yao missed 250 regular-season games due to foot and ankle injuries in his final six seasons.

While playing for Houston Rockets, Yao had average of 19 points in regular seasons and 19.8 points in pley-offs.

He is one of China’s best-known athletes, with sponsorships with several major companies. His rookie year in the NBA was the subject of a documentary film, “The Year of the Yao“, and he co-wrote, along with NBA analyst Ric Bucher, an autobiography titled “Yao: A Life in Two Worlds“.

He is under contract with several major companies to endorse their products. He was signed by Nike, Reebok,  Pepsi, Coca-Cola, Visa, Apple, Garmin and McDonald’s.

Yao is married to Ye Li, a women’s basketball player for China. He met her when he was 17 years old. Ye was not fond of Yao at first, but finally accepted him after he gave her the team pins he had collected during the 2000 Summer Olympics.

Officially, she is the only woman he has ever dated. Yao married Ye in a ceremony attended by close friends and family and closed to the media.

On May 21, 2010, the couple’s daughter Yao Qinlei (whose English name is Amy) was born in Houston, Texas.

Check out our Did you know? section. Every Friday a new story. Tomorrow read about Indonesian player who turned on gender controversy.