Mariel Margaret “Mia” Hamm (born March 17, 1972) is a retired American professional soccer player. She was a founding member of the club Washington Freedom, but what is more important she established the foundation. 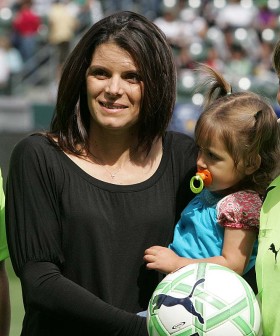 The Mia Hamm Foundation is a reflection of her life experiences. It is focused on providing support for two important causes: raising funds and awareness for families needing marrow or cord blood transplants and continuing the growth in opportunities for young women in sports.

In 1997, Mia’s brother Garrett passed away from complications related to aplastic anemia. Through an all-star exhibition soccer match, “The Garrett Game”, she was able to raise awareness and funds for bone marrow disease research, and to support families through the marrow transplant process. At halftime in the 2001 Garrett Game she brought together marrow donors with recipients for the first time. As she admitted, It was clearly her most satisfying moment away from the field.

Hamm held the record for international goals, more than any other player, male or female, in the history of soccer, until 2013 when fellow American Abby Wambach scored her 159th goal to break the record.

She is the author of Go For the Goal: A Champion’s Guide to Winning in Soccer and Life and appeared in the HBO documentary Dare to Dream: The Story of the U.S. Women’s Soccer Team.

GRE M: Olympiacos getting ready for a fresh start