Bernardo Rezende for WoV: “Nobody has made a real research about my ban”

Bernardo Rezende, the mastermind of all successes of Brazil in recent history and certainly one of the best volleyball coaches in the world, gave an interview for WorldofVolley. 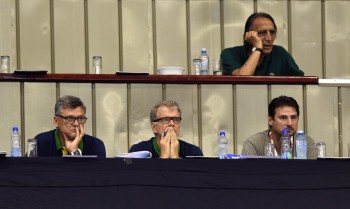 Rezende is currently watching the games of his Brazil from the stands, as he is unable to stand next to the court due to a 10-game suspension received by FIVB. Still, his boys are scoring very decent results in the World League 2015 – 5 wins and only 1 defeat.

So our first question for Mr. Rezende was how much is he satisfied with his team so far in the World League 2015?

“It’s OK. We are switching a lot of players during the matches and we are trying to make the whole team grow. We have 4-5 weeks to get prepared for the final tournament in Rio, so we have to build a structure of the team. I am saying this because we are obviously under a lot of pressure as the hosts. There are a lot of good teams and it will definitely be very tough. But, we hope that we will have a good competition.”

Which teams would you point out as the biggest rivals of Brazil in the World League 2015?

“Right now I would say USA, then Poland which is playing very good and then there is France with a really good team in the Group 2. Italy is having some ups and downs but can also perform very well, Russia is not with the full roster so their results are not giving the real picture of the team. And of course Serbia is good as well. It’s hard to say, but at the moment I would say that USA, Poland and France are the favorites.”

The final tournament will be held in Rio de Janeiro, is that a big advantage of Brazil?

“Well there are two ways of approaching that question. It’s good because there will be a lot of people supporting us, but there will be also a lot of pressure as the whole press will be there and they are waiting for the good result. We have to deal with that pressure and to use our crowd to be better than the others.”

You are still under a 10-game ban from the FIVB, and you have to watch the games from the stands. Can you say something about that subject?

“I think people do not want to know the real truth. Nobody has made the real research about my ban. Nobody in the history of volleyball got a 10-game ban. So there is something more than just a suspension here. People should do a more thorough research and to try to find out what are the real reasons for my suspension. I do not want to speak any more about that, because I could end up with another 10-game ban.”

RUS M: Butko – “People are saying we need to call Muserskiy or someone else…”