Ventceslav Simeonov, has joined Germany’s VfB FRIEDRICHSHAFEN for the current season. With this interview he provides some insights about his experience with the club only a few hours before the much awaited clash with Zenit KAZAN for the prelims of the 2013 CEV Volleyball Champions League. 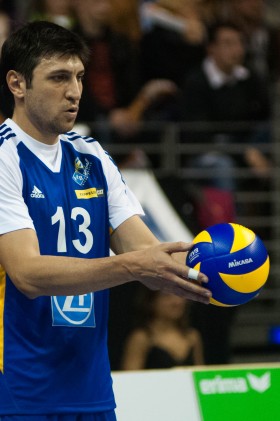 How do you feel here in Friedrichshafen? What are your first impressions of the club and the city?

Everything is great! I was pleasantly surprised when I got here. Even though it is my first time playing abroad I have everything I need.  I already knew that the club was very professional and they had a good reputation. I am satisfied and happy to be part of this team!

You arrived three weeks ago in Friedrichshafen, have you had the time to get to know your teammates?

Yes, we are working really hard. I still have to keep improving and make up for the time that I lost since I wasn’t here in the pre-season. The rest of the team had been practicing for 2 months before I got here so I am still working to find the right chemistry.

You know Zenit KAZAN pretty well. Can you recall some memories from the Champions League final you lost to the Russian team back in 2008 as you were playing for Copra PIACENZA?

Three days before the final I had an ankle injury so I couldn’t play in the final, I had to watch my team from the bench and it was tough. We worked so hard to get to the final that it was very disappointing to lose there. But now it’s different, this is still the first leg of Pool play and there is still a long way to go. It is always exciting to play against one of the best teams in the world like KAZAN.

To your understanding, what are the chances of VfB FRIEDRICHSHAFEN to advance to the next round of the 2013 CEV Volleyball Champions League?

We need to try to win every game, win the away game against ROESELARE and the ones we have in December to finish second in our Pool.  It is possible and I know we can do it.

What does VfB need to do to win the coming match with Zenit KAZAN?

To dominate we have to play without making any mistakes, we have to serve well and try to make things complicated for their reception, but then again we have to keep control in our backline as they serve really well. If we play good defense, make some blocks and play good in reception we will have a good chance to win.

EXCLUSIVE: N’Gapeth could play in France!