WL: Six years after… Gold is back in the USA!

For the second time in history USA has won the World League! Americans have beaten Brazil in the big final of 2014 tournament edition with 3-1! 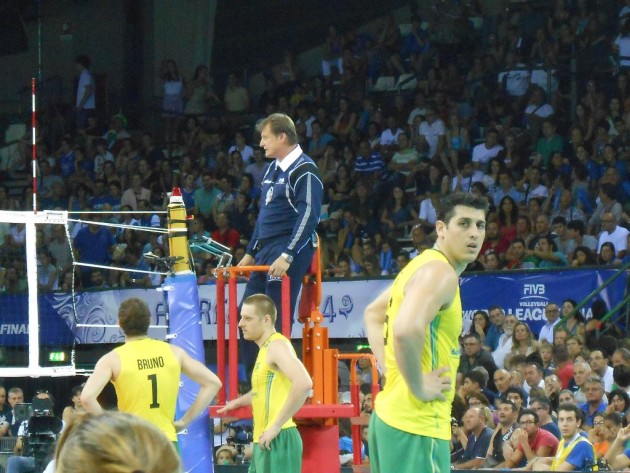 At the first TTO Brazil is up by 2 (8-6). So far, both teams are excellent in attack, a the result between two best scorers is equal – Wallace De Souza – Taylor Sander 3:3.

Excellent move by Christiansen, he surprised the Brazilian defense and lowered a ball into their court. However, Brazil is still up by one (11-10).

Blocking festival in Florence. After a good start in attack, now we are seeing some spectacular defenses. Especially in block. It is rare to see that the very first spike makes a point. And, Brazil is enjoing that kind of game, it is 16-14 for Rezende’s squad at the second TTO.

Wooah, what a save by Murilo who returned the ball from the stands… However, in vain! USA takes two in a row for 16-16.

What a point! Brazil had two counter-attacks to double the lead, but failed to convert them into the point. At the end fantastic Sander outsmarted the Brazilian defense once again. It is all tied at 19-19!

Another turaround! Sander made a service mistake, and then Brazil performed a perfect block on Anderson! Now Brazil has the set ball again (26-25). USA called a time-out.

USA have saved three set balls so far – 27-27. Challenge system saved Americans. Brazil won the point and the set, but after the video review it was clear that Murilo touched the net by his HEAD! It is all tied at 28-28!

Holt blocked Saatkamp! 29-28 for USA, time-out Brazil! What a period for Lucas Saatkamp. He firstly tied the score at 29-29 and then had a chance to score once again, but hit the ball into the out, 30-29 for USA!

USA has won the first set! David Lee blocked Lucarelli one on one for 31-29! What a set! 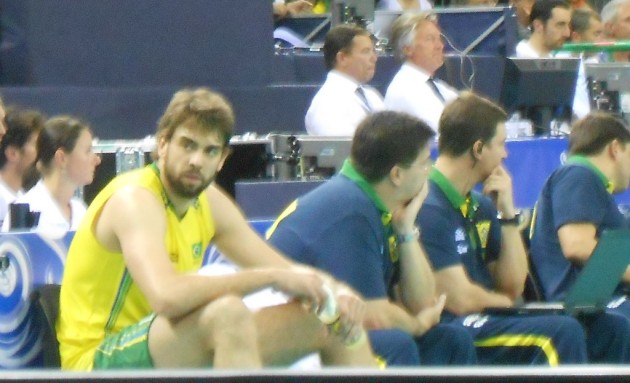 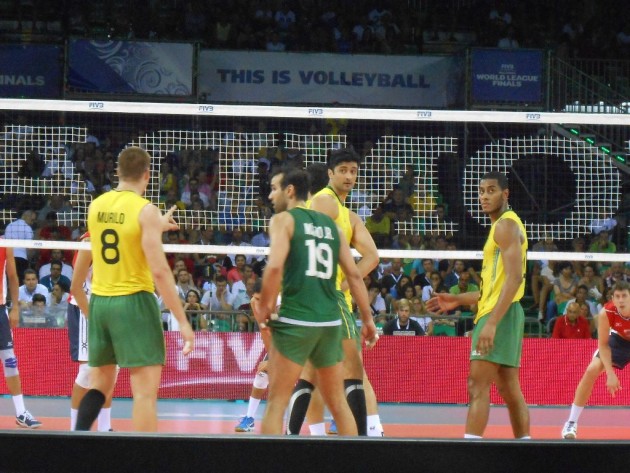 Even play at the beginning 5-5. Wallace and Sander are just unstoppable. It’s 10-7 for Sander in points at the moment. The overall result is tied at 7-7. Brazil goes up by 1 at the first TTO – 8-7.

Neither team can make two points lead. At the moment Brazil – USA 11-11. Finally, someone crossed the magical line – USA is up by two – 13-11. Brazil called a time-out.

Uffff, Wallace without block… You could guess the outcome. Luckily ball did not hit anyone. And then, Saatkamp with an ace for another tie 13-13. One more strong serve of Saatkamp! This time Sidao converted it into a point after a powerful spike on the net. Brazil leads 14-13, USA time-out.

USA with two in a row after the break, but Brazil answered on the same way. Sidao blocked Sander and it is 16-15 for green and yellows at the second TTO. Brazil is heading towards seizeing the second set, Vissotto blocked Rooney, now Rezende’s squad has +3 (18-15).

Again Vissotto. This time spike from a counter and it is 19-15, while immediately after Lucarelli scores for 20-15!

And another big mistake by USA, this time it was a team mistake, Holt and Christiansen colided, point and set for Brazil 25-21! 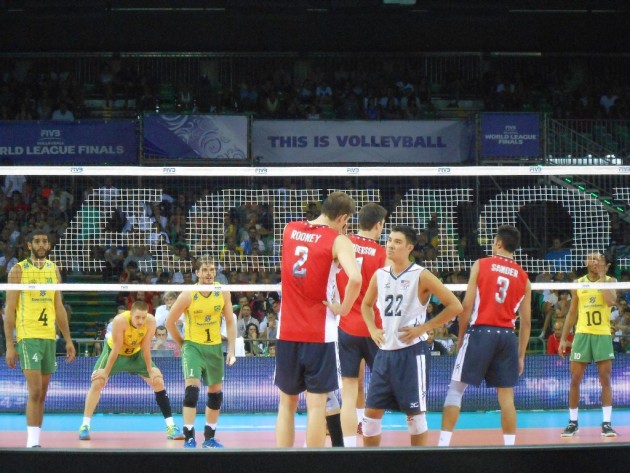 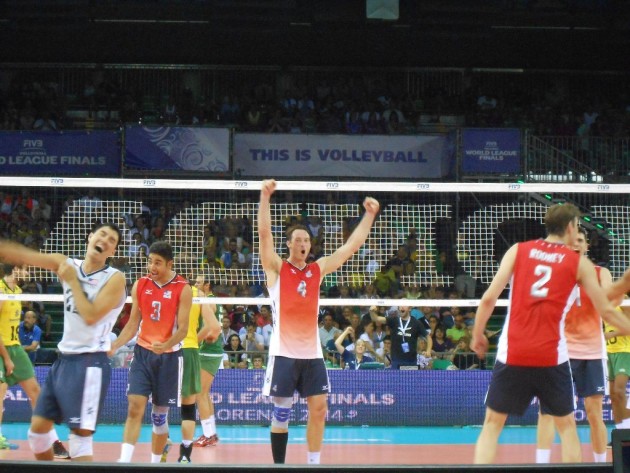 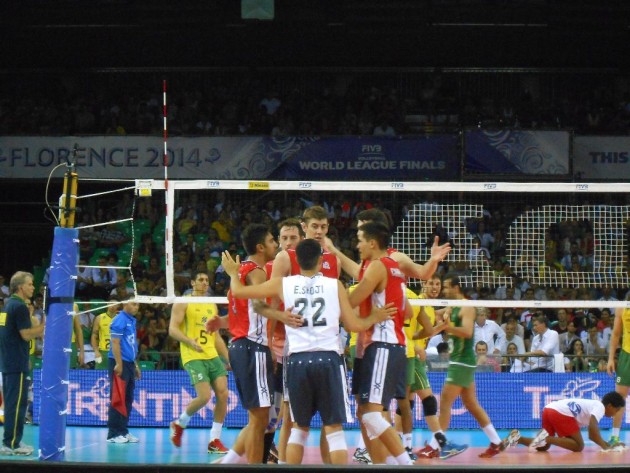 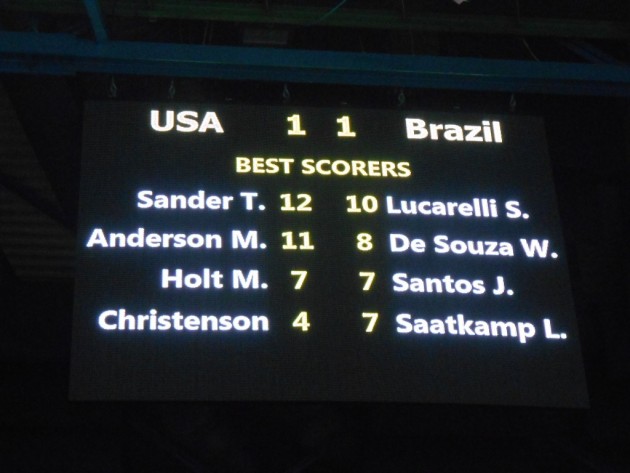 Brazil has won first three points in this set, but a big turaround arrived soon. Americans answered with five in a row, and Rezende called a time out, 5-3 for USA.

Such a strong block by David Lee on Lucas! And this is second time only in this set thay Lee blocks his rival in this way! And then, and ace from Christianson for the USA lead of 8-5 at the first TTO. Another two for USA – 10-5!

Tremendous dig by Shoji and then even better block by Sander – 18-10. Finally, Brazil shows something. Three in a row for green and yellows (18-13).

USA is five points away from seizing this set (20-15). David Lee is giving a free blocking lesson in Florence. Another one on one stop for 22-16. 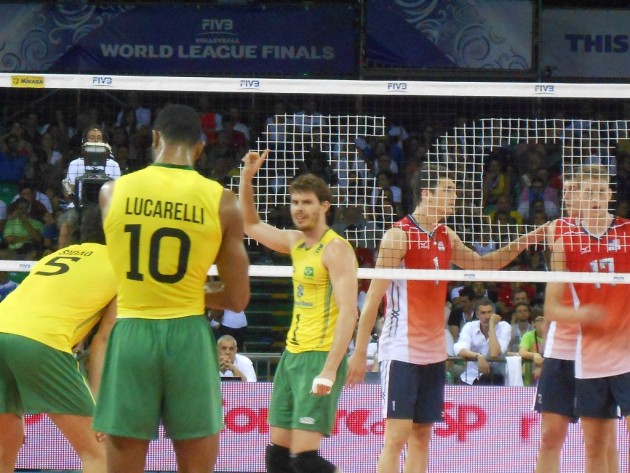 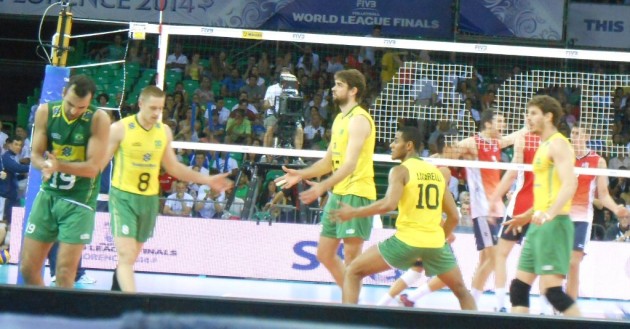 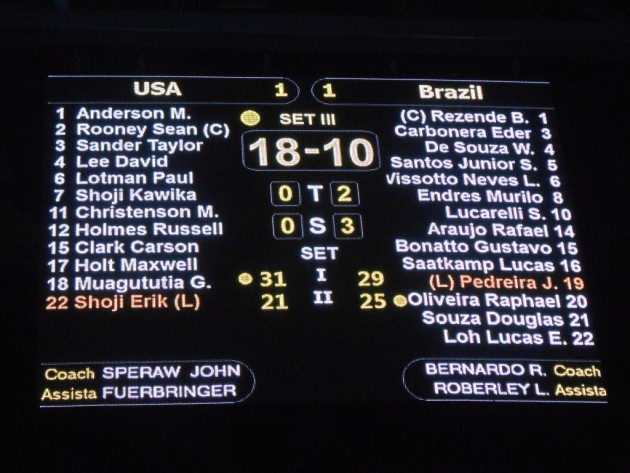 So far, teams are tied at 4-4. Ace by David Lee for the first two point lead in this set 7-5 for USA. Lucarelli answered with an excellent serve too for another tie at 7-7. It is 8-7 for USA on the first TTO.

Brazil takes the lead, it is 11-10 for green and yellows. And now they have the two point advantage after Holt spiked the ball into the out 12-10. +3! Wallace outsmarted Sander at the net and Brazil has 14-11.

But, a great answer of USA. Anderson with spike and than block on Lucarelli, while the young Brazilian then made another mistake, so it is all tied at 14-14. One more block of Lee on Sidao, USA has the lead on the second TTO – 16-15!

Brazil had a counter-attack on 16-16, but failed to use it. And, that was not the only problem for them, because they lost the following point as well 18-16. Time-out Brazil.

What a turnaround by Brazil! Three consecutive points for Rezende’s side, and they now have the lead 20-19! Now, USA makes two in a row for 21-20! Ace by Muagututia! Lucky shot, as ball touched the net 22-20!

It’s 23-22, Brazil is serving. What a point. Tremendous defense by Brazil, but David Lee again blocked Lucarelli in Brazil’s couter-attack 24-22.

USA failed to use the first match ball, but they used the second one! Matt Anderson put an end on this final with such a strong spike!

This a second gold in World League for USA. After Rio 2008, Americans are number one again! 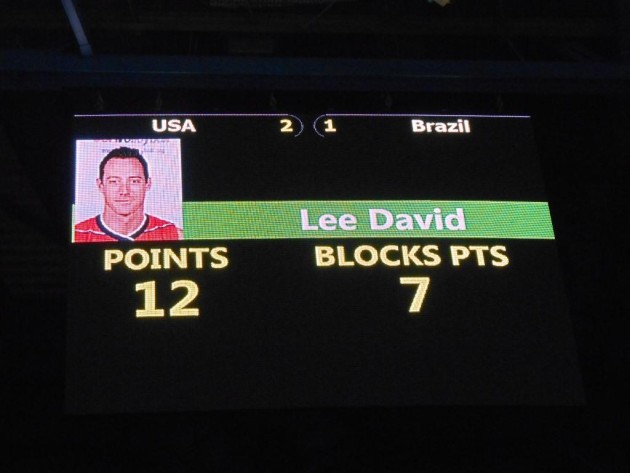 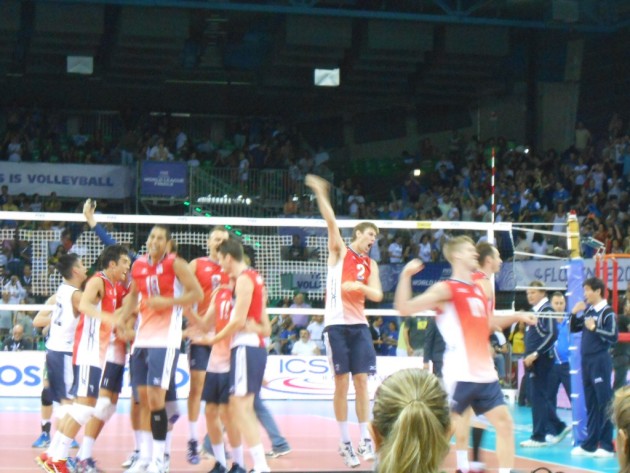 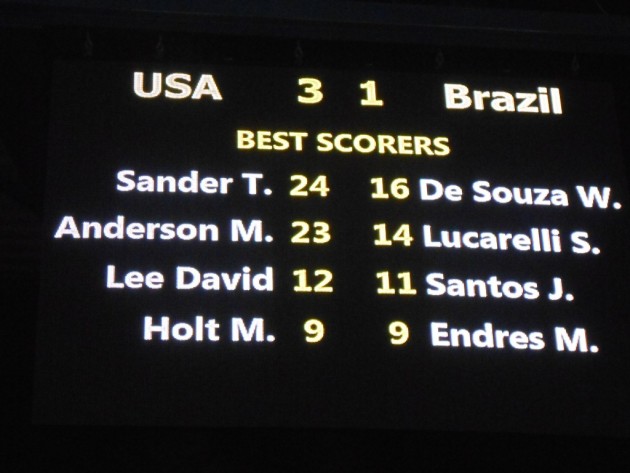 Hopefully Brazil and Italy south conspiration will be eliminated in world championship if they again will be cheating. But finally God is fair and USA won.

I agree! You are right. This some kind of justice!