The Argentine receiver closed a good 2013 after a start where he fought to maintain his place in the National Team. At the end, he closed a great moment with his individual performance in Brazil. 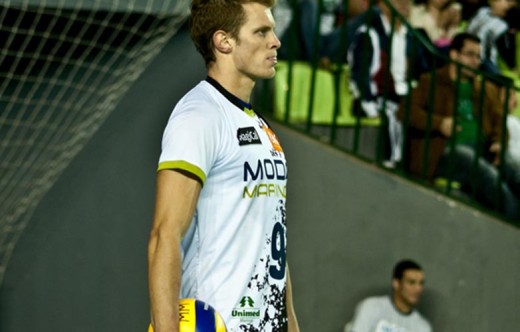 Rodrigo Quiroga began with some surprises that obligated him to show what he can do. With the chance of refusing to demonstrate anything, instead he trained every day to pursue his goals. After a hard period, he’s now starting a 2014 after being among the best of Brazil and with the dream of Poland World Championship on his head.

At the beginning of the season he found new scenery in Argentina after many discussions and the doubt about the continuity of the coaching staff.

As part of the new directives, he accepted the decision of now former Argentina National Team’s coach, Javier Weber, that he was not going to be the captain as he had been in the previous 4 years. With that resolution a new challenge appeared: he had to show that he can be in the initial line up even when he started many matches from the bench.

However, he capitalized every chance and tried to give his best in the minutes he was in the court in the World League’s Intercontinental Round Match.

Despite his contributions, Weber decided to use another players and Quiroga saw most of the defeats out of the rectangle and could do nothing: before the Final Six -where Argentina was already qualified for being host- the team lost 9 of 10 games, the only victory was 3-1 on its debut against USA. In all those games, Rodrigo played a few sets and wasn’t part in three of them.

For the big commitment, the coach decided to give him confidence again and he was one of the best in the matches against Bulgaria and Italy, where the Argentine road ended with a 5th place and a questioned performance.

Despite this, he was the top scorer of the team in both games and also helped in reception in the hardest matches of the competition. Sadly, that was not enough and Argentina was out of the World League, an unhappily end of the National Team’s first phase.

A few weeks later, Rodrigo was in the roster for the South-American Championship because of his merit and his desire of continuing playing in the initial sextet. There the team was going to vindicate its performance partially, but didn’t find its best neither.

The player born in San Juan was absent only in one match against Paraguay because the coach decided to give him rest, but he did a great tournament and guided Argentina to the World Championship in Poland 2014. Even though it lost the gold medal after the defeat by 3-2 against Brazil, the 26 years old boy was awarded as the best receiver of the championship together with his friend Lucarelli.

His consecrating tournament was with 18 points against the multi champion in the final that show that even he didn’t have the captain armband, he was fully committed with the team.

The National Team’s season was over, but a new adventure was ready to receive Rodrigo: Moda Maringa, the Brazilian team lead by Ricardinho, hired him in a contract that meant the second consecutive year for the receiver in the Superliga. The purpose was clear: fighting for the championship.

The friendly matches generated a lot of expectations in the fans, since the 1,90 tall player showed a lot of his potential. The path of Maringa in the league was irregular, with a good beginning that was later blocked with 6 defeats.

When Maringa finally found the way of victory again, the first round ended and the hopes raised again. With an excellent triumph over RJX, the last champion by 3-2, Quiroga and his crew were motivated, but a loss in the last match of the year against Canoas spoiled the party.

Despite the results, the player with the 9 on his jersey made really good matches that placed him among the best spikers of a tournament full of stars in the end of the first round.

He was the 3rd best attacker of the Superliga behind Wallace and Lucarelli with 82 points out of 165 attempts with only 22 errors. Now, he waits for the resume of the competition next Tuesday, 7th against Montes Claros to scale positions on the standings and reached the best part of the tournament.