ARG M: Atomic volleyball in Argentina, Boca and Lomas on top after tie-breaks! 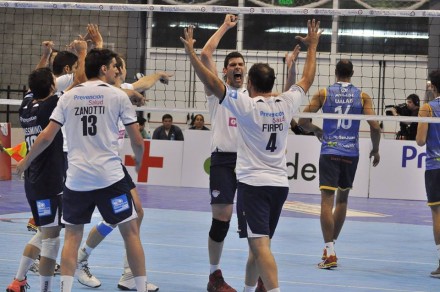 The fifth and decisive set was vibrant. Point by point, the teams took no advantage until change of sides, where a block by Gustavo Porporatto gave the first advantage to the local team.

With 10-9, Lucas Ocampo sent the cannon from the service line and another block by Porporatto made the advanatge bigger.

In the finish, another ace by Ocampo and blocking of Diego Bonini served the victory to Lomas who remained with more than a valuable victory 15-10.

Bonini and Ocampo were top scorers in Lomas with 23 and 22 points, respectively. In UPCN, Bulgarian Nikolay Uchikov had also 23 points.

Point by point and the visitors came with minimal advantage to the finish line (9-10). The Brazilian opposite of Boca, Renato, scored with the attack on the block and Weber called his second timeout (9-12).

Nicolás Bruno saved two match balls but eventually win went to Boca (12-15) who now has all two wins in Serie A1.

With 21 points Boca’s Renato was a top scorer, while in Bolívar, Raphael scored 20.

POL M: Anastasi – “Miguel Falasca is like son to me”