Argentina: Great growth and dreaming on the 2012 olympic games in London

Buenos Aires, Argentina, December 28, 2011 - The year 2011 for the Seniors Men Team closed after a very demanding international season starting with the FIVB World League as the first official competition of the year, when the team coached by Javier Weber obtained a very important fourth place, after playing one of the Semi-final matches v the best team of the World, Brazil and then fight for a place at the podium facing the host team of Poland. 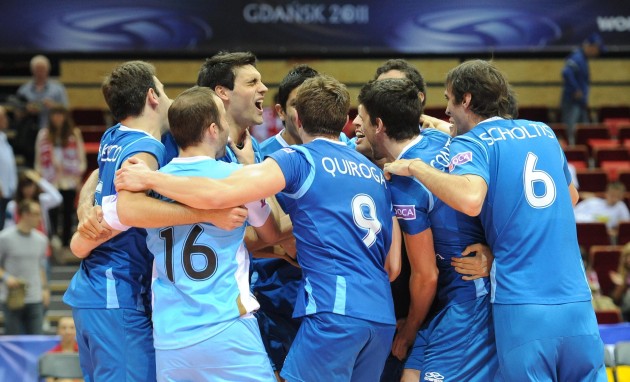 With reference to a podium place, the Bronze Medal at the Pan-American Sport Games in Guadalajara meant returning to obtaining medals at the great continent, since the year 1995 with a team of players that belong to the ACLAV Argentine A1 League and with five tie-break definitions in a total of six matches played.

The team obtained also the second place at the South American Championship after losing a very tied final match v the strongest team of Brazil in Cuiabá. The team defeated Venezuela, future great rival for a place at the 2012 Olympic Games next May.

The South American Championship gave Argentina the chance to play, once more, the demanding Japan World Cup, a tournament that gathers the best teams of each of the five continents and the best second runner-ups as per the World Ranking, Japan and two wild cards. Eleven matches with important victories over Serbia and Cuba losing against teams that stand over Argentina at the world ranking (Cuba and Serbia also belong to that group) except Iran, that clashed with the light blue – white team overcoming it on a very hard tie-breaker definition.

In the World Cup qualified for the Olympic Games, Russia (as Champion of the competition and prior FIVB World League in an outstanding year); Poland (great surprise team of the season coached by Andrea Anastasi and Bronze Medal at the FIVB World League and second runner-up of this tournament) and Brazil, that won a place for London in its last match v Japan. The qualification of Brazil allowed that the Continental Olympic Qualification Competition to be hold next May in Argentina, without the Brazilian participation.

The Argentine Seniors Men Team, with most players participating of the same since the 2010 Italian World Championship includes great young talented players that come from the grass-root national teams like Quiroga, De Cecco and Pereyra (Junior players during the season 2007), while Conte, Solé and Crer were included later. The team obtained good results and output and therefore became one of the teams that fight on the top places of the World.

In Argentina, the team during this season played friendly matches returning to Mendoza and Chaco for the pleasure of the local fans.
Now that the season closed, Argentina advanced one place at the FIVB World Ranking, standing on the 8th place behind Brazil, Russia, Italy, Poland, USA, Cuba and Serbia.

The great goal of the season 2012 will be to qualify for the Olympic Games and thereafter play a great FIVB World League. It will be its 14th participation at the most important annual FIVB National Men Teams competition, that will have on the Olympic year a new formula. The rivals will be Portugal, Germany and Bulgary, the last country organizing the Final Round.

For the coach of the team, Javier Weber “The year was outstanding because the team never stopped growing in each competition and because we improved on the FIVB World Ranking, because we made history becoming one of the best four teams of the FIVB World League and because the team finished playing very good knowing that the growing path goes on. We included 25 players along the season and each one has given something to the team. Each one of them improved its output but over all its participation as part of a great team. The Bronze Medal at the Pan-American Games proves this with a team, whose players participate of the National league, playing good volleyball over all. This opens great hopes for the year to come, making it stronger our work that started in the 2009 season. We have to close this first period celebrating the Olympic qualification”.