Sollys Osasco is in the Superliga final. They closed the series against Volei Amil by winning in the second game 0:3. Now they wait their opponent from the Unilever - SESI SP match-up. Fabiola, Fernanda Garay, Jaqueline and Roberto Guimaraes shared their thoughts. 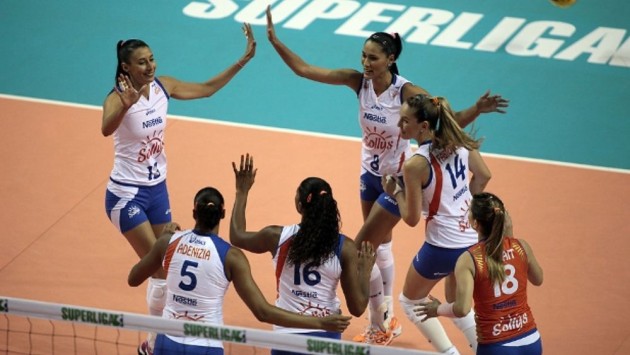 “Playing volleyball is full of surprises. In certain situations, a player is better and the other times he’s not. I am very happy with this final and my congratulations to this group” said Fabiola

Highest scorer of the match, Fernanda Garay scored 15 times. “The team is to be congratulated. Today I stepped on the court determined to win. We came up with a wonderful spirit and believed in this victory. I am very happy because it is a special time to make the final, which will be my first” said Fernanda Garay.

Jacqueline praised the semifinal opponent. “We knew it would be a complicated game, because on the other side was an experienced team and a coach who knows us very well. But we endured the pressure well and played our best game..We were very concentrated, focused and our attitude was key to achieving another goal, which was a place in the final” said Jacqueline.

On the side of Volei Amil, coach Jose Roberto Guimaraes emphasized the importance of Campinas crowd. “First and foremost, I would like to thank the fans, who supported us from day one. This enthusiasm was growing and encouraged us. Today we had a packed house. I apologize for not having played a better game. We lacked a bit of insight and patience” said the coach, who regretted the outcome.

“It is the frustration of not having tried harder. But we had a tough season. We must emphasize that we played against a team that is basically the national team” noted Jose Roberto Guimaraes.