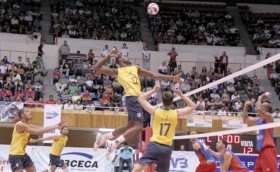 Brazil will play for the gold medal against Mexico while Puerto Rico will play for bronze on Saturday at the “Juan de la Barrera Olympic Gym” versus Argentina.

“This was a good match, Brazil resisted a lot on the net and was very strong with in the middle and on defense. We failed in taking the right choices”, said Roberto Muñiz, captain of Puerto Rico.

“This match was very good for us. We worked a lot with our blocking game and served well. It was complicated for us in the end, but we know how to solve those difficult situations,” Mauricio Borges de Almeida, captain of Brazil said.

“For us this was a great match. Before this, Puerto Rico played five sets that is very difficult physically and mentally. We could get the best of it and tactically we played great,” said Brazilian coach Leonaldo Roberley.

“We began to play very slowly. We could improve a Little bit, but the strength and height of Brasil imposed conditions during the match,” said David Aleman, head coach of Puerto Rico.

For more information about this competition, click on Pan American Cup 2013 M.

See the WoV Community profiles of Brazil and Puerto Rico.