Volei Futro will receive RJX in the first semifinal match at 18:45h in Placido Rocha in Araçatuba (SP). 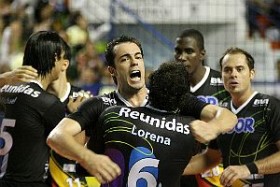 In the quarterfinals, the team from São Paulo eliminated Medley / Campinas (SP) in two games. RJX comes to the new phase after winning also in two games over SESI-SP.

“Without doubt, this is an extra motivation. SESI-SP is a team that has accustomed to victories in the Super league. The fact that we achieved the ranking of this team gives us confidence. However, we are aware of the difficult game that follows against the team that is aggressive in the service, “ says Mark Miranda.

For Cezar Douglas, the coach Volei Futuro, the next phase is undefined. He expects that both teams play well and believes it will be a great challenge.

According to the coach of Volei Futuro, one of the most important moments of the competition has come.
“This will be a major confrontation with several experienced players on both sides and I believe now is the time to have benefit from all the good that has been done in the league.”

VfB Friedrichshafen celebrated 3-0 in Tours in the CEV Champions League play-off match. The match between Ziraat an… https://t.co/7XXmHxIkBt

Reply Retweet Favorite
.@VeroVolley and @AMSVolley go to quarterfinals – German side doing it for first time as pool leader… https://t.co/XOnjYHgHYt