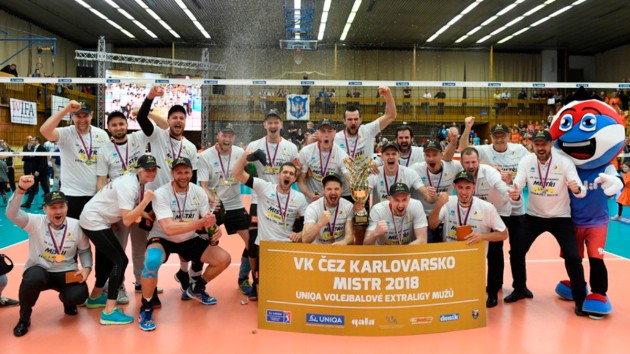 As it was not enough that the two lowest seeded teams from the playoff semifinals advanced to the gold medal series. In the finals, the side that was ranked lower than its opponent managed to win the 2017/18 Extraliga title. No.4 ČEZ Karlovarsko closed the series against No.3 Kladno volejbal cz with a 3-0 as they clinched Game 3 in the tie-break, partially 21-25, 25-20, 22-25, 25-20, 15-12. Despite the fact Karlovarsko made a sweep of their rivals in the series, each of the three games was very competitive, ending in five sets.

Hiring Filip Rejlek turned to be the best move Karlovarsko made before the season. After 12 years of playing abroad, the veteran opposite was the most prominent figure of the team throughout the season and, especially, in the playoff finals. After pouring in 33 and 38 points in the first two games, respectively, Rejlek topped Karlovarsko in Game 3 as well by scoring 24 points (5 aces). The Estonian Henri Treial made 7 kill blocks and 73% attack (11/15, 1 error). Tomáš Hýský scored 23 points for Kladno. The Spaniard Víctor Bouza contributed with 74% reception (35 digs, 2 errors, 49% excellent).

It is worth mentioning that Kladno were deprived of help from their starting opposite David Konečný, who sustained an injury in Game 1 and did not play ever since.

ITA W: Folie will have several tests on the left knee

FRA W: RC Cannes and Beziers in the French final