BERLIN Recycling Volleys have recently done a major step to determine the course of their future as they extended the contract with head coach Mark Lebedew until at least 2015. Read the latest news from volleyball world on worldofvolley.com. 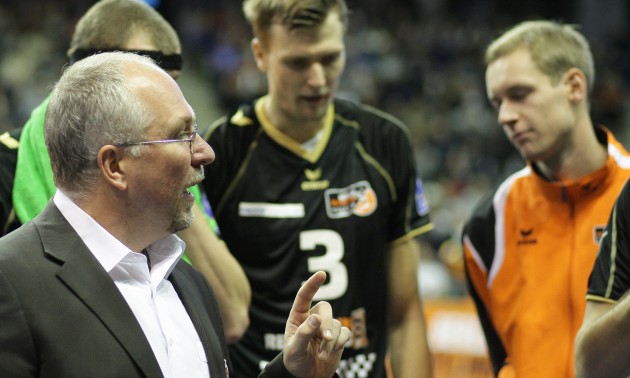 The lyrics of Men at Work’s international hit “Down Under” will continue playing when the Australian head coach of the side of BERLIN is introduced at home matches played at Max-Schmeling-Halle. “We are happy to be able to renew the contract with Mark”, club president Kaweh Niroomand says. “Of course, he made a major contribution in reaching the national championship final in 2011 and eventually claiming the trophy last year. For me personally, he succeeded in combining new methods with traditional practice procedures”, Niroomand explains further. “What is more, he has a lot of standing with sponsors, media and fans.”

Born in Adelaide in 1967, Mark Lebedew has worked for the Australian national team and for various clubs in Germany before he joined the side of BERLIN for the start of the 2010/11 season. Immediately, he took his team to the national championship final and eventually brought off the coup of claiming the victory in 2012 – the first title for the club of BERLIN since 2004.

Glad about the extension of his contract, Mark Lebedew looks forward to the up-coming challenges: “I’m of course happy to be able to continue working with the team and my other colleagues here in Berlin. For a coach it is always important to plan on the long run”, the Australian says. “I’m happy about what we’ve reached so far, but in the future we aim to defend our standing here in Germany and to further establish and improve ourselves on the European level.”

In terms of their national objectives, the team of the Australian wants to follow its words with action as the playoff series in Germany’s capital starts on March 17 with the quarterfinals.

Favourites pull ahead of competition at the African Nations Championship