GER M: Gyorgy Grozer – I want to play at the Olympics

Gyorgy Grozer firmly believes that he will play at the Olympic Games in London. 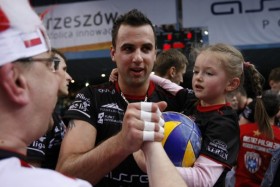 On the first weekend in June Germany will host the intercontinental tournament in Berlin, and their rivals will be teams of Cuba, the Czech Republic and India. Only the winner advances to London.

“I think we will win the Tournament for the Olympic qualification” – Gyorgy Grozer says. “You can see that the work that we do with our new coach, is interesting and brings positive results. He managed to create in our team something new, which resulted in a good atmosphere and a fun game”.

“Vital van Heynen, is a really unusual character and the type of coach, who I had not had the opportunity to work with yet. He has a positive approach to his work. I think that it was already seen in the tournament in Sofia. Vital has very good contact with us. You can see that has recently played volleyball at a high level and understands what it’s all about. Many of us has had good club seasons – in Poland, Russia, Italy, and Germany. We learned from the previous year and now we are stronger. I think we should use our own court advantage and defeat our opponents , which are Cuba, the Czech Republic and India”.

He added: “It is not easy for me to play all the time on an equal level. In PlusLidze I gave it all really. Now try to give the maximum in the German team. Fortunately, the high stakes games trigger in me the extra energy and emotion, especially when the stands are well crowded, as they were in the semifinal of the tournament with Bulgaria in Sofia. Then it is easier to forget about fatigue and focus on the game. I hope that the tournament in Germany, the fans will support us and fill the stands, and then we will play better. Certainly we shall not lack motivation, to win the battle for Olympic qualification is now our main goal. The coach also has developed a good preparation program in addition to training so that we also had a moment of breath, and such a free weekend, as the latter, to spend time with family. In recent weeks I trained hard, because I wanted to be in the form and play the best in the qualifying tournament, and it requires me to adequately prepare and rhythm of the match. After the tournament in Berlin, which have about 8 to 10 June, will’ll get from the coach time to relax. Probably will not go to the tournament in Argentina, but I’ll have about two weeks off for a short holiday to recover the freshness and later to prepare well, hopefully, to perform at the Olympics”.