Germany outplayed the Dominican Republic to claim a straight sets victory 25-16, 25-18, 25-19 in Pool B match of the FIVB World Grand Prix in front of a full crowd at the Santo Domingo Volleyball Palace on Saturday. 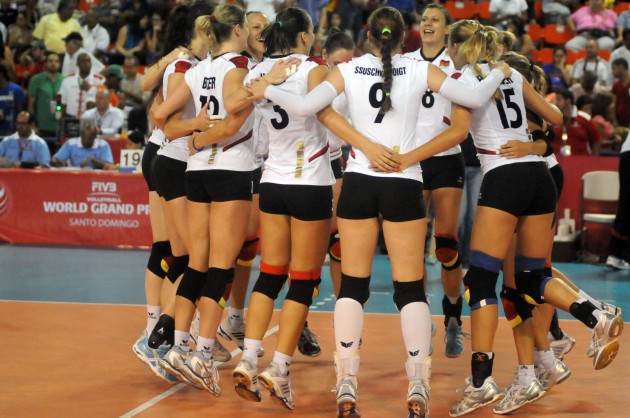 The German team dominated their opponent from start to finish and held advantages of 10-3 in blocks and 6-4 in aces. The winners committed only 12 errors to 27 by the defeated side.

Germany took a 5-1 lead behind the offensive actions by Ssuschke-Voigt and Furst. Hanke followed a spike by Brinker with a powerful ace that Cabral was unable to handle to give Germany an 8-3 advantage. Three spikes in a row by Kozuch expanded the lead to 11-4. The European team was in the driver’s seat 16-7 when teams arrived to the second technical time-out following spike and ace by Ssuschke-Voigt and Beier. A few spikes from Nunez and Cabral gave the big crowd something to cheer for but the damage was already done. Furst scored for set-point and one Dominican error closed the action 25-16.

Brinker scored with two aces and Kozuch produced pair of aces for an 8-3 margin for Germany. Nunez came off the bench and sparked a Dominican comeback at 12-9 with one spike followed by two aces but Kozuch reacted with a spike and Furst blocked to restore the order and Germany led 16-10. Two spikes by Kozuch gave Germany a comfortable 20-13 margin. Vargas, Eve and Rivera had three consecutive points to cut the distance at 21-17, before Vargas netted a serve. Two Dominican errors closed the set 25-18.

Two blocks by Furst contributed to an 8-5 lead for Germany in the third set. Spike and block by Vargas followed by one stunning spike by Nunez tied at 9-9. The teams battled point by point until 14-all when Cabral’s spike went long and Beier hit a quick spike for the 16-14 Germany advantage. Mambru and Cabral hit two in a row for a 16-all tie. Kozuch’s spike combined with an opponent error gave Germany a two-point lead at 19-17. One ace by Kozuch expanded the gap to 22-17 and Germany took the set and the victory 25-19.