As he officially stepped down from the presidency of the German Volleyball Federation (DVV) this past weekend, Werner von Moltke received a special expression of gratitude by CEV President André Meyer, who acted there also on behalf of FIVB President Jizhong Wei. 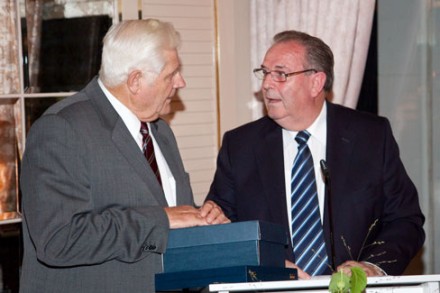 As already announced some weeks ago, von Moltke left the leadership of the DVV after the 2012 Olympics in London that actually turned into an absolute milestone for the sport in the country as Julius Brink and Jonas Reckermann claimed gold in men’s Beach Volleyball thereby being the first European pair in history able to do so. The DVV will be chaired by Thomas Krohne but CEV President André Meyer first deserved his praise to the outgoing president: “It is not a pleasure, but actually an honor for me to bid farewell to you in the name of the FIVB and CEV” said Meyer. “We will miss your personality as there are only a very few of that kind out there; you have contributed to absolute highlights for the sport not only in Germany but in general and under your guidance the DVV has turned into one of the most dynamic and active among all European Federations. I would like to have you at my side as special advisor for the European Championship that will take place next year in Germany and Switzerland” concluded Meyer.

Additionally, the CEV President personally invited Mr. von Moltke to the next CEV Congress that is scheduled for mid-November in Luxembourg so that the German leader will have the chance to enjoy an additional farewell in presence of the delegates of the remaining 54 Federations affiliated to the CEV.

ALB: Special book sums up history of Volleyball in Albania