2013 CEV Volleyball Champions League competitor Generali UNTERHACHING has solidified its position in the Bundesliga. Aside from a loss to German champion BERLIN Recycling Volleys they hosted VCO BERLIN and KW BESTENSEE. 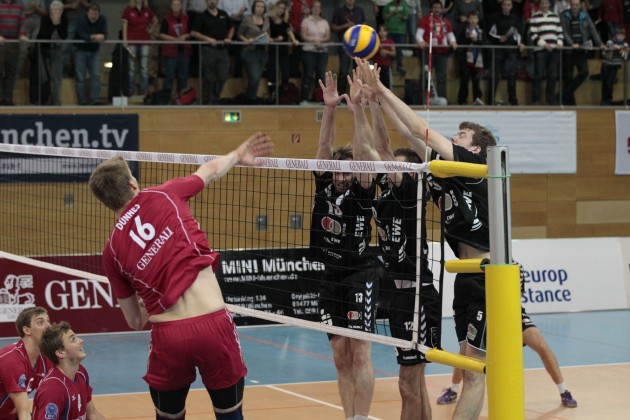 UNTERHACHING had to execute double duty over the weekend. In the Bundesliga they hosted VCO BERLIN and KW BESTENSEE who usually share a ride to their away games to save costs. Generali first had to confront the young team from VCO and despite having to work harder than the result might suggest the hosts won 3:0 (26-24, 25-18, and 25-18). “This is a team that doesn’t let it go. They are celebrating every point and they don’t have anything to lose, of course”, wing spiker and MVP Tom Strohbach said after the match against his former club.

Generali’s head coach Mihai Paduretu welcomed the chance to give his reserves a start after the win against Euphony ASSE-LENNIK (3:1) in the CEV Volleyball Champions League a couple of days earlier. In the third set he even brought in setter Huib den Boer who had finally overcome his injury. Den Boer filled in for a sick Branislav Skladany.

One day later against BESTENSEE Paduretu counted on his regulars like captain Christian Dünnes as UNTERHACHING got another 3:0 win (27-25, 25-11, and 25-20).

However, setter Patrick Steuerwald was quick in addressing the problems Generali had. “We had a tough time finding our rhythm. It got better in the second and third set, but then again there were situations when we lost three, four points in a row. We must do that better come Wednesday”, Steuerwald said.

On Wednesday, UNTERHACHING is hosting German champion and 2013 CEV Volleyball Champions League competitor BERLIN Recycling Volleys for their first-round match in the German cup. BERLIN is unbeaten in Bundesliga play so far. A week later Generali welcomes Lube Banca Marche MACERATA for the matchup of the two unbeaten teams in preliminary Pool D of the Champions League.