The match between Pamvochaikos and Finikas will decite from which place shall Pamvochaikos start in the playoffs. This is the last round of the regular season. This and other volleyball news read on Worldofvolley.com. 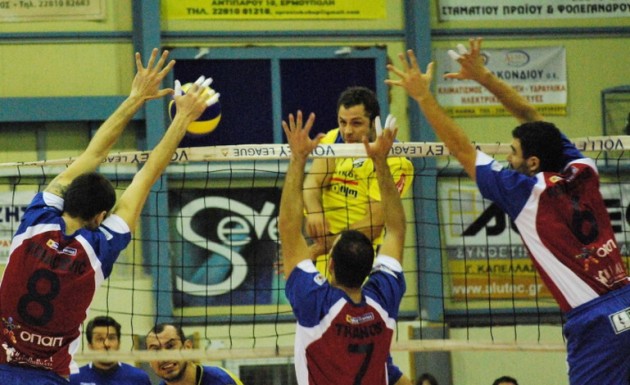 The Pamvochaikos already guaranteed top spot in playoff but it wants to keep winning and take the second position to have home advantage until the semifinals. To achieve this results regardless of other games Pamvochaikos must win against Finikas SYROS. The Pamvochaikos is tie with Ethnikos and has an advantage, but tie against PAOK has a disadvantage.

If the Pamvochaikos defeated with 3-0 or 3-1 Finikas SYROS, Ethnikos lost 3-2 to Kifisias and PAOK get three points from Olympiakos then between Pamvochaikou, Ethnikos and PAOK will be triple tie.

In this case their ranking are: 1.PAOK (9v.) 2.Pamvochaikos (5v.) 3.Ethnikos (4v.). In this case the Ethnikos MGS Alexandoupolis takes the 4th place.

The Pamvochaikos VRAHATI coach Nikos Zalmas said: “The final countdown begins. If we talk about the most important match of the season, this is definitely the match against Finikas, in which we want the victory to seal 2nd place and go with home advantage in the semifinals of the playoffs. We had to prepare for the last game. We’ve done a good job all year and I think in the end we done well. If you use smart our service and we stop their attack, we will get a good result. With the help from the fans we believe it will mark the second place in the regular season. We expect the second place at the beginning of the season and to finish higher than last season.”

The Finikas after defeat in the final of the Cup against Olympiacos tries to regroup and play another final. The project of Finikas SYROS will be very difficult. It Finikas SYROS win against Pamvochaikos VRAHATI it is not enough to go to playoff. They need PAOK to win over Olympiacos and Ethnikos get even one set against Kifisias.

In that case will be triple tie between Ethnikos, PAOK and not good for Finikas SYROS because the ranking is: 1.PAOK, 2.Ethnikos MGS Alexandoupolis 3.Finikas SYROS.

The Finikas SYROS libero Dimitrios Gkaras said: “I feel pressure in the form of anxiety. We know our capabilities. If we return in the Cup Final against Olympiakos, I’m sure we will win. I am pretty sure we will be focused and calm throughout the match and especially at critical points. “

In 5 games in the past, Finikas SYROS has 4 victories against one of Pamvochaikos VRAHATI.

To read more news from this competition click on Greece.