"Juantorena is a mercenary." I also heard this after the defeat and it is shame." 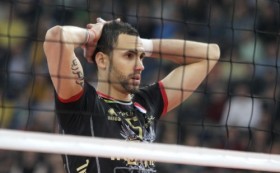 They are the first to say that on the evening of Polish semifinals, Juantorena has perhaps done less than we have used to expect of him. But the fact that “we have become accustomed” to his level of excellence means that he is a reliable sportsman.

To say that “Juantorena is a mercenary,” to hear from those who have praised him until yesterday, who will pay for the ticket to cheer for him in the next few games maybe even on 22 April, is a bad sign.

On Saturday’s semifinals Osmany was not the only one to be “alone” on the court. The whole team has done their best.

The rest is just conspiracy that neither he, nor other volleyball players of Trento and other clubs deserve.

That was the first time for Trento. Even the V-Day in Bologna was a strong shock. The reason for that is because the defeat came in the midst of something that would be a small revolution, concerning the transfer of Juantorena.

We do not know if the decision to bring forward the announcement of his departure has unleashed directions.

The only certainty is that if the Russian offer is reported by many than the thirty companies have the duty to accept it.

What remains for us, is to see whether Trento will fill this void contract.

The fact is also that the company’s President Mosna for years has used to present his teams well in comparison to competitors, in the domestic market and worldwide.