Monza got off to a strong start but Piacenza quickly recovered from an early four point deficit. Piacenza stepped up, took the set and the next two to make it a sweep in this semi-final game 1 of Challenge Cup qualification. MVP: Vladimir Nikolov. 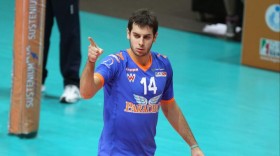 Vladimir Nikolov (Copra Elior Piacenza): “We were a bit disappointed, the elimination from the league playoffs against Cuneo was hard to take in. We had lost by the minimum margin in every single set, that was not easy to put behind us. We did a good job to keep our heads up and take this victory. Because we want to be in Europe”.

Salvatore Rossini (Acqua Paradiso Monza Brianza): “We knew it was going to be a difficult game. Piacenza has players capable of making the difference at any time. The fact Monza will not exist next year did not influence us at all. We are professionals and we want to win to give our fans that dream of Europe”.