Trentino is the new champion of Italy! 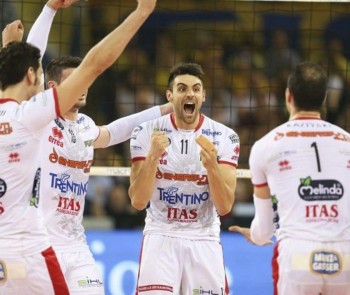 They deserve every single praise! All of them! Maestro at the bench Radostin Stoychev, then a true leader on the court Matey Kaziyski, the captin Emanuele Birarelli, wonmderkid Simone Giannelli, then Sebastian Sole, Fillipo Lanza, Massimo Colaci, Mitar Đurić, Lukasz Zygadlo, Martin Nemec… They have worked so hard throughout the whole season, always showing a great respect to their opponents… And they eventually received the biggest possible reward.

In the Game 4 of the finals. Trentino outplayed Modena on the road and closed the series by 3-1 in wins! The first set was perhaps the key of this match. Modena had a set point at 24:23… However, Mitar Đurić tied the score at 24:24, then Earvin N”Gapeth spiked the ball out of bounds – 25:24, and finally Đurić performed another strong spike from a counter-attack for 26:24, 1-0 for Trentino.

In the second set the things were tied until 18:18. Then the away team scored three points in a row – 21:18. Modena tried to make a comeback, but the home side got stopped by Simone Gianneli! Fantastic 18-year old setter firstly made a tremendous “drop” on the net for 23:20, while the same player eventually finished the set with an ace – 25:20, 2-0 for Trentino.

The third set was also the last. Not just in this game but in this season! Trentino had a powerful opening and quickly escaped to 7:2. It was the crucial margin. Boys led by Radostin Stoychev successfully kept the lead until the end, while Sebastian Sole scored the final point for 25:19, for 3-0…

…For the 4th championship title of Trentino in club’s history!