This was just spectacular! Verona and Perugia played one of the best games in the entire season! At the end, Perugia triumphed and advanced to the Serie A semifinals! 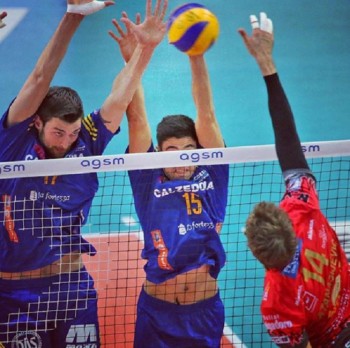 It is difficult to describe everything that happened in PalaOlimpia this Wednesday evening. This was one of those games that you MUST WATCH! A two-and-a-half volleyball battle between world-class teams. It is indeed pity that one of them had to lose.

Let’s start from the beginning.

Perugia won the opening two sets and got just a step away from winning the Game 5 of this incredible quarterfinal series. However, Verona stormed through the third set and reduced the margin to 1-2. Then, the home team performed just a stunning comeback.

It was 19:14 for Perugia in the fourth set and everything looked like the visitors will close the match. But, Verona scored 5 points in a row and tied the score at 19:19!!! Two sides remained all tied until 21:21 when Verona scored two points in a row and escaped to 23:21! The hosts did not missed this big opportunity – 25:23. The overall result was 2-2 in wins, 2-2 in sets!

With enormous psychological boost that they gained by winning the fourth set, Verona had a flying start of the tie-break – 7:4! However, the things were just getting interested in PalaOlimpia. Perugia tied the score at 7:7, Verona escaped to 10:8, Perugia equalized at 11:11!

Taylor Sander made a bad reception, while Birarelli punished that immediately with a strong spike at the net – 15:16! Match point for Perugia!

The away crew made another good service, which brough them a counter-attack. Aleksandar Atanasijević made a spike… Verona managed to keep the ball above the floor somehow. However,  the hosts could not organize a good attacking play, so Taylor Sander had to spike from a very difficult position against a triple block… Aleksandar Atanasijević was the one who blocked the American – 15:17! 2-3!

Perugia have advanced to the Semi-Finals where they will face Lube!

POL M: Asseco Resovia triumphed in Gdansk! They will now cheer for Bielsko-Biala!

i think verona is just burnt out cause of challenge cup, but at least they won a european title. this rival of perugia and verona will be a good thing for next season. lube vs perugia, i will go for lube but for modena vs trentino thats 50-50