With the stunning figures resulting from the registration that was closed this past January 30 the qualification process for the 2014 FIVB World Championships has been finally worked out in order to fill in the vacancies assigned to CEV, which stand at 8 and 9 for men and women respectively. Read latest volleyball news on Worldofvolley.com. 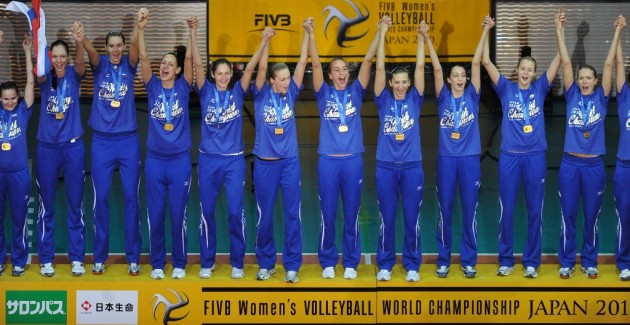 Poland and Italy are pre-qualified as hosts of the final rounds and the European contingent will include also the 2 best ranked teams per gender of the 2013 CEV European Championship (not yet qualified).
The qualification process for the remaining 6 (men) and 7 (women) vacancies is composed of three rounds as follows:

– A first round scheduled for May 23-26, 2013 to be joined by 28 (men) and 29 (women) teams subdivided into 7 Pools whose composition was determined by taking into consideration – as far as possible – the geographical location of the various countries. Such tournaments will be played as single round robin with the first ranked teams eventually advancing to the third round while the second ranked sides from Pool A to F will make it to the second stage of the qualification process. The teams entering the competition via the first round were determined following the European Ranking for senior national teams as of January 1, 2013.

– A second round scheduled for October 2-6, 2013 with a single round robin tournament per gender starring the six second-ranked teams stemming from the first round Pools A to F. The first, second and/or third ranked teams will advance to the third round depending on the number of spots to be filled in there.

– A third round scheduled for January 3-5, 2014 to be joined by 20 teams, with 12 entering the competition by this stage due to their position in the European Ranking as of January 1, 2013. A total of 5 single round robin tournaments with 4 teams each per gender will be played; in the men’s division a ticket to the final round of the World Championships will be booked by the first ranked teams of each Pool plus the second ranked with the best score, while in the women’s competition the winners of the various tournaments will be joined by the two second ranked teams with the best score.

The composition of the first-round tournaments reads as follows: