In tonight’s last match of Pool I, Slovenia went through Bosnia and Herzegovina in straight sets on 2013 CEV Youth Volleyball European Championship - Boys for 73 minutes of action for the excited crowd at the sports hall. Primož Vidmar was the best scorer of this game with 14 points for the winning side. Toncek Stern added another 13. Captain Muris Krivokapa became Bosnia and Herzegovina’s top scorer with 7 points. 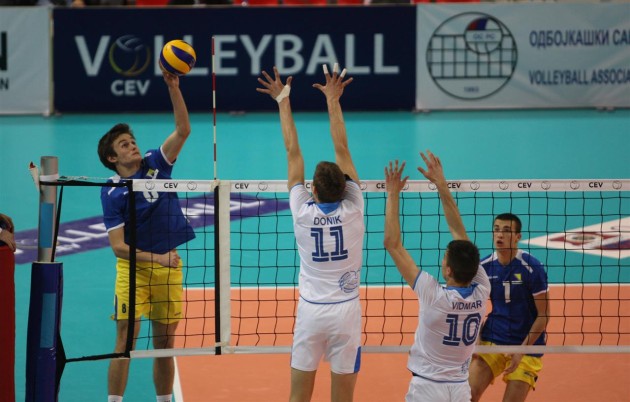 Despite playing against the host team, the Slovenian boys felt at home as a very large and noisy crowd of fans supported them whole-heartedly from the stands of the Laktaši sports palace throughout the match. The team of Iztok Ksela totally outplayed its opponent in all elements of the game during the first two sets. The Slovenian serve made life difficult for the team of Bosnia and Herzegovina as it piled up 6 aces against none for the opponents in these two sets. Excluding the first point in set 2, there was not a moment when the home boys were in the lead as Slovenia won convincingly by 25-13 and 25-15.

The third set was a different story. In the beginning it looked like it was going to be just like the previous two as Slovenia quickly went 7-1 and then 11-4 up in the score. But it was finally time for Bosnia and Herzegovina to fight back. Scoring 5 points in a row with Dušan Kuzmanovic behind the serving line, they came back for 9-11 and made things interesting. A while later the BIH team not only caught up with the opponent, but also took the lead by 22-19. However, Slovenia held up and, after trailing 22-23, scored 3 consecutive points with a direct kill by Jakob Rojnik for the winner.

Iztok Ksela, head coach of Slovenia: “We expected a tough game because we knew that the host would be well-prepared. We started the game with a nice serve, and that lifted our moral. After that we relaxed, and the hosts took advantage of that. It turned out that they were not as bad as it was expected based on the score of the first two sets. In the end, I think our victory was well-deserved.”

Ljubisa Ristic, head coach of Bosnia & Herzegovina: “My biggest regret is that the boys did not do their best. I could see they were under a lot of stress, and this was our greatest opponent, not Slovenia or any other team. We did not play any preparation games this year and that was visible. The boys only started playing in the third set, and I hope we will do better tomorrow. I told them that we could use this Championship to see where we stand and to realize how much more hard work needs to be put into this team.”

Jernej Vrhunc, captain of Slovenia: “We prepared for this game really well. The game was tiring, but I think we played well. Our next game is against Italy whose players are really good. It is going to be a hard game, and we will have to try hard.”

Muris Krivokapa, captain of Bosnia & Herzegovina: “We practiced as much as we could. Our best game was shown in the third set where we finished only two points behind. Slovenia has a really good team.”