After two rest days, China, Cuba, Thailand and Puerto Rico resumed play on Wednesday at the second phase of the China International Women’s Volleyball Tournament in the city of Shenzhen. The first phase of the tournament, which took place in Ningbo, concluded with a 3-0 win record for hosts China. 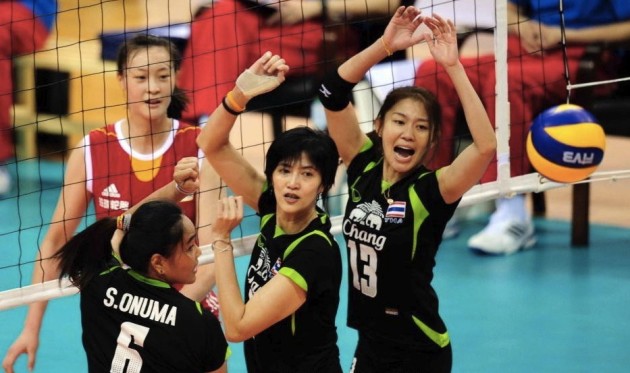 The tournament is important training for the four teams in the lead up to the World Grand Prix season that is set to start later this year.

In the match between China and Thailand later that afternoon, the hosts did not face too much trouble in the first two sets of the game. However, Thailand made a forceful counterattack in the third set leading 7-1 and the 12-7. But Zeng Chunlei helped China to two ties and then a one point lead (16-15) at the second technical timeout. Thailand were in with a chance to take the set as they took the lead with 22-21 after scoring consecutive 4 points. However, at the key moment Zeng Chunlei’s blocking and Thailand’s error in spiking resulted in a narrow victory for China.

“Thailand did very well in defense today and their serving was piercing. I think the problem is stamina, which affected their performance. Anyway, the better they play, the more we can improve,” China coach Lang Ping commented after the match.

The final match of the evening was an intense five-set encounter between Cuba and Puerto Rico. The young Cuba led twice and came close to their first win in the tournament in the fourth set. But Puerto Rico seemed more experienced and consistent in scoring critical points and eventually took the match.