The De Lange Munte sports hall in Kortrijk is completely sold out for tomorrow’s return match between the Belgian and the Greek national teams in the third and final qualification round of the 2013 CEV Volleyball European Championship – Men. Coach Dominique Baeyens is trying to keep his team with both feet on the ground. 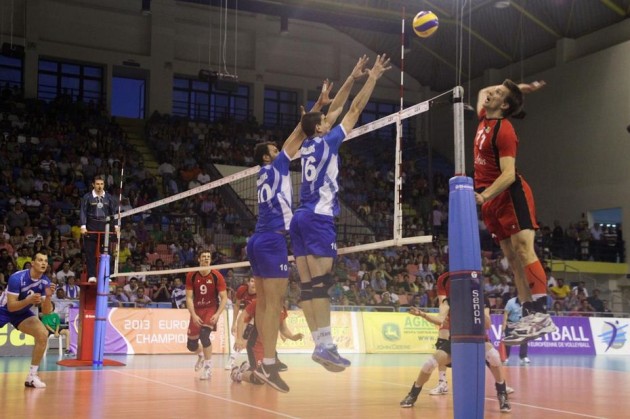 “In fact, there are several possible scenarios after the 3:0 win in Orestiada last week.  The first one is euphoria from the start of the game, the idea that nothing wrong can happen. But I think that is purely theoretical. My players are realistic enough,” Baeyens contemplates.

“The second possibility is the revenge of the Greeks after the slapping defeat on their own ground. After the game in Orestaida a Greek journalist came to me and said that this was the heaviest loss of the Greek team at home that he remembers. I must admit our team had never played better since I became coach and it was practically a humiliation for our opponents.”

“The third scenario is what everybody thinks – that we win by 3:0 again in Kortrijk. Wrong thinking!  Because I saw a lot of video tape with the Greek team in a much better shape than last week. We made only six faults in three sets and we scored thirteen blocks. That is exceptional. If we play the same way as last week, a lot of teams will have difficulties against us. So I asked the team to repeat its performance from last week. If they can reach that level again, I think it could be another fine win.”

“But we do not live in the clouds and we must start with the thoughts in our head that this is a complete new game. I saw the Greek team play a very good World Championship qualification tournament.  We may not underestimate them, even if they say that Mitar Tzourits will not be there due to injury. We wait and see…,” Dominique Baeyens concludes.