EL M: Baeyens – We had to fight for every point

The hosts of Austria did fight bravely in front of 920 home fans but eventually lost their opening match to Belgium at the end of five long sets. After the match coaches Dominique Baeyens and Michael Warm gave their quotes. 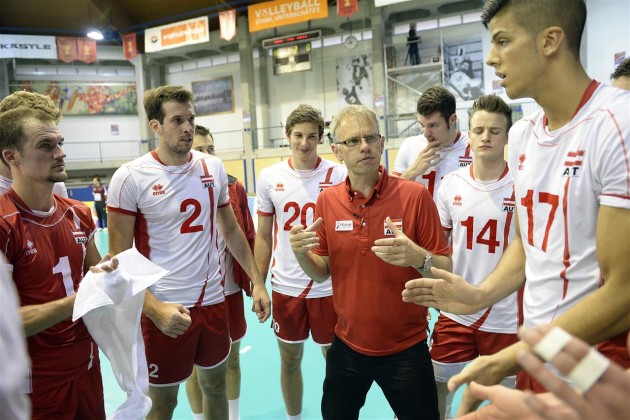 ”We stayed focused for five sets and this is very positive and encouraging” says Austria head coach Michael Warm. “However, we could not control some details of the game. We pressured our opponents for a long time but in the end they started playing better and better”.

“We started out very concentrated as we had planned. We pressured the Belgians with our serves but in the second set they used this fundamental to their advantage” adds Thomas Zass. “It was a good start of the tournament but in the end we could not seal the deal as we had hoped”.

“We caught a slow start. In comparison to our recent game with Greece for the third round of the European Championship we changed three players in our starting six” stresses Belgian mentor Dominique Baeyens, “So in the early phases we had some problems to find the right chemistry. The Austrians did push us to the limit and we had to fight for every single point. In the end we are very happy with this win”

To read more from this competition click on European League 2013 M.

FRA M: Facundo Santucci – I want to be known in Europe

BRA W: Unilever back in training on Monday