In the first match of the fourth weekend in the 2013 FIVB World League Pool B, Germany overpowered Serbia 3-1. Aleksandar Atanasijevic of Serbia topped all scorers with 30 points, while Denys Kaliberda scored 20 for the winners. WorldofVolley brings you the latest volleyball news. 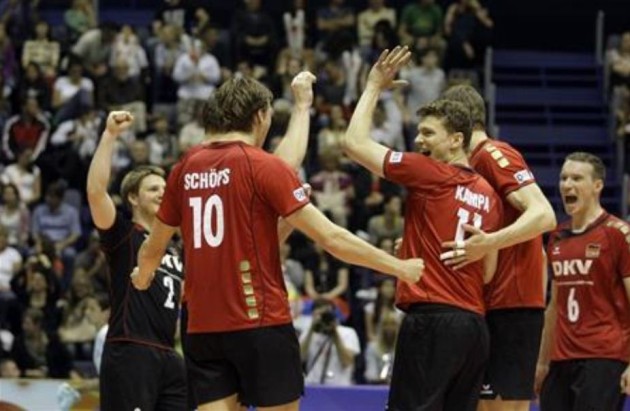 Germany started the match better, picking up three of the first four points, and maintaining the lead throughout the entire set. At the second technical time-out, it was (16-12) to the visiting team. The Serbians pushed hard to try to get closer, but they were too nervous to seriously threaten the determined German side. In the end, it was a well-deserved (25-20) win for Germany.

The second set was much more balanced from the start. At the first technical time-out, Germany was up by a point (8-7). However, after the break, Germany once again escaped to a 3-point lead (12-9), forcing coach Igor Kolakovic to ask for a time-out. Serbia could not quite manage to find the right rhythm. Coach Kolakovic tried by substituting Nikola Jovovic and  Marko Ivovic, which resulted in two consecutive points for (13-11). This time Germany called for a time-out, and managed to stabilize their game before the second technical break (16-13). Once again, a steady three point lead proved to be decisive for the German side, who wrapped up the second set at (25-21) to take the second set.

In the third set, Serbia finally woke up and got an early (4-1) lead. However, Germany slowly but surely started narrowing the gap, which resulted in a tie at 10. At the second technical break, the home side led (16-14). Serbian youngsters did well in this set, maintaining the lead, with the third set ending at (25-21) in Serbia’s favor.

Germany was back in front in the fourth set. At the first technical break it was (8-5) for the visitors. Serbia tried to fight back, reaching within one point of the lead a couple of times, but could not quite turn over the score. Germany firmly kept the lead and pushed back the Serbs through the second technical time-out (16-14). After the break, the hosts could not find any more ways to match the inspired German team, who finished it off at (25-21) to take a surprising victory on the road.

Milos Nikic, receiver on the Serbian team: “Germany surprised us, they played the way we were supposed to play in the first match. We have to react, and I think we will because we can hardly do any worse than today. I expect a victory.“

Denys Kaliberda, receiver in the German team: “We played really consistent in the first match, and I am pretty happy with our performance. We were really good. Tomorrow I expect a much more difficult match.“

Serbia and Germany will play their second match of the weekend on Sunday, June 30, at 20:00 CET in “Pionir” Hall of Sports in Belgrade.