The Iran national team has arrived in Havana, Cuba, led by Coach Julio Velasco. Iran is in front of two tough World League games against the host. Iran arrived in Havana without Ghaemi Farhad and Arash Kamalvand. 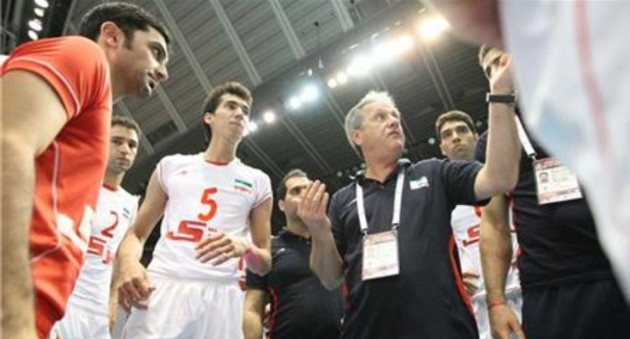 Julio Velasco with his team

Iran’s players seemed to be in good shape during their first training session at the Ciudad Deportiva Coliseum, where the Cuban national team defeated Russia last Saturday. Coach Velasco knows his players are very young and still need to learn a lot, but last week’s victory over Olympic Bronze medallist Italy have given them a second wind.

The visiting team have arrived in Havana without Ghaemi Farhad and Arash Kamalvand who have both sustained injuries. But the rest of the roster is ready to play before one of the most intense home crowds in the World League.

“They still need to get used to travel a lot, to play back to back days, but that’s something they will get with time,” said Velsaco of his team. “Next year we’ll be more experienced and the results will be better. Now they are very famous in Iran because they beat Italy and they have to handle this kind of fame, carefully,” warned Velasco.

Velasco also stated that it is an be an honour for his players to be in Cuba, despite the poor results of the host and 2012 World League finalist, in this year’s edition.

Velasco commented that the match “against Cuba is going to be all about learning.” “Besides, I want to see how my players handle all the pressure in this Arena. I want my players to learn not only about playing technique, but also about winning and losing, travelling and getting the full experience of the World League.”

The Iranian ambassador in Cuba visited the team’s training session, and promised huge support this week-end. A technical meeting is scheduled for Thursday, at Meliá Havana Hotel, prior to the press conference ahead of this weekend matches.

Cuba and Iran meet Friday and Saturday at 00:40 GMT.

WL M: Finland hoping to finish on a high note this weekend