GP: Brazil get much-needed win against the Netherlands

Brazil staged a straight-set victory against the Netherlands, 25-15, 25-20, 25-15 in Pool K at the Baluan Sholak Sport and Culture Palace on Saturday. They now inch closer to the 2013 FIVB Volleyball World Grand Prix finals with a 7-1 scorecard. 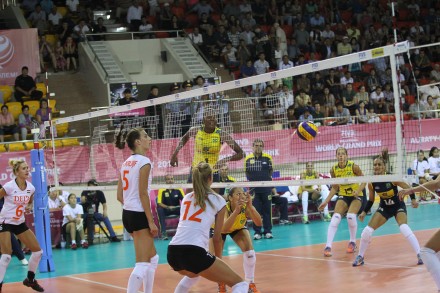 The Netherlands played excellent defence at the first set to set up Anne Buijs at the wing. But the Dutch hitters were able to outsmart the opponents with  soft taps,  to take the 8-5 lead. Soon enough Brazil’s frontline was fiercely manned by Fernanda Rodrigues, who not only scored off blocks, but sent several attacks as well.  The Brazilians went on a scoring rally and later took the 16-9 advantage. Guimaraes and Rodrigues proved unstoppable in their scoring rampage, to take Brazil to a successful first set at 25-15.

The Netherlands’ defence tightened at the net, closing out on the Brazilians’ attacks. Guimaraes scored from the wing to bring Brazil to a 16-15 lead at the second TTO. Coach Gido Vermeulen utilised his bench players, including Lonneke Sluetjes who scored several points for the Netherlands. But the Dutch lagged in floor defence to give the 25-20 win to Brazil.

The Dutch looked disorganised with their defensive formation by the third set. Meanwhile, Rodrigues (BRA) displayed versatility with her attacks: hitting from the wing and soaring from the back row. Defence was likewise top priority on the Brazil side, as they denied and deflected any isolated chance the Dutch could set up their plays. The Brazilians pulled away from their counterparts and emerged from the final set with 25-15.