Serbia recovered after losing in the first round against Bulgaria and in the second round of Pool D at the European championship in Germany and Switzerland beat the Czech Republic with a maximum 3-0 (25-21, 26-24, 25-23). 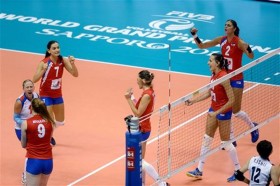 The match was played in Germany’s Schwerin, in Hall “Sport und Kongresshalle“ and lasted 2 hours and 14 minutes. Serbia only got the first set easily while the other two could easily obtain the Czech Republic. Serbia played without injured Brankica Mihajlović and it was felt in the larger part of the match.

In the first set Serbia played in the great rhythm so already on second technical time-out it was clear who will take the 1-0 lead. It was 16-11 for players led by coach Zoran Terzić, and soon 17-11. Serbia did not dropped a difference until the end of the set.

Czech Republic woke up in the second set and led 7-3 thanks to a good block and defence. Serbia tied at 8-8, but soon the Czech Republic put themselves up 13-10 and held the advantage until 18-18. After that the game was played point for point until Serbia come into 2 points advantage (23-21) over amazing Jovana Brakočević. It seemed that Serbia will bring the the set to an end, but the Czechs equalized at 23-23. Serbia won the set 26-24 difference.

Czech Republic had also a better opening in the third set, putting themselves up 9-6, and at the second technical time-out they had a lead of 16-13. However, when it seemed that the Czechs will narrow the score in sets, Serbia had started to catch opponents’attacks, to convert counter-attacks at the end to convert the second match point into a victory.

Serbia after two rounds has a win-loss ratio 1-1 as well as the Czech Republic.

Most efficient the Serbian team were Jovana Brakočević with 25 and Nataša Krsmanovićwith 15 points. In the Czech Republic, Aneta Havlíčková with 23 and Andrea Kossányiová with 8 points were the best.

See the WoV Community profiles of Serbia and Czech Republic.