In the first match of the second day played at Memorial Wagner in Płock there was a large surprise. The Dutch confidently defeated Russia 3-0, who started the game with a backup line-up, but even the return of starters did not help them. 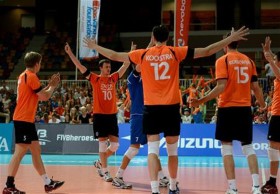 On the first day of the tournament, Russians proved to be harsh teachers for the German national team, beating them without losing a set.

At first glance sensational news of Dutch victory over Russians can be slightly eased with the fact that the “zbornaya” played with second line-up in the first two sets. Fans who watched the game could say that the “second” six of this year’s World League winners is much weaker than the primary.

Russian players had big problems in the reception, which influenced on their disposition in the attack. The Dutch especially harassed Denis Biryukov. Lokomotiv Novosibirsk receiver made mistakes in the reception and the attack, both. “Oranje” won the inaugural set primarily helped by Niels Klapwijk. His attacks created panic on the other side of the net.

Despite the loss in the first set Andrey Voronkov decided not to change the composition and left the second line-up on the floor, which was ruthlessly exploited by the opponents. Klapwijk still played impressive, and above all effectively, but he got a lot of support from Wytze Kooistra. On the side, Russians were mainly led by Nikolay Pavlov. However, in the very end of the set, Pavlov had a weaker moment that sealed the Dutch victory.

The 0:2 exhausted patience of Russian national team coach. Voronkov began to replace the weakest players. The first “guilty” was named Biryukov, substituted with Alexey Spiridonov.  Famed for his controversial behavior, after entering the floor, Spiridonov tryed to provoke the opposite leader, Klapwijk. Dutchman, however, kept a straight face and the cold-blooded won the next point.

Seeing that the game of Olympic champions from London does not improve, Voronkov made other changes. However, neither Sergey Grankin nor Andrey Ashchev were not able to stop the Dutch national team, who won the third set to enjoy the triumph.

See the WoV Community profiles of the Netherlands and Russia.

RUS W: Uralochka – redemption for the...