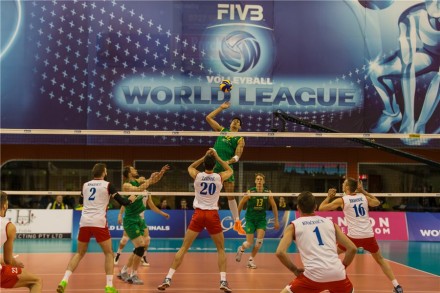 It didn’t seem that Serbia will lost first set as it had comfortable 4-8 lead. Edgar pulled his teammates forward to an equalizer at 12-12. With some tensions on the court (each side got a yellow card) in the finish and Sanderson’s one-man show, Australians made a turnaround and took Set 1 (25-22).

In the second set, it was the same story as for Serbian lead, but with a different outcome. The visitors had 4-7 thanks to Starović’s good performance. Still, Edgar knew it wasn’t over and leveled at 13-13 with two consecutive aces. It was a point by point play until 19-19 when Starović’s powerful serve gave Serbia 19-21. Edgar’s spike was blocked for one set each (22-25).

Serbian early lead in third set marked the rest of the period. After 1-4 and 5-10 there was no return for the hosts. It all culminated with a red card for Australian head coach Santilli who was nervous due to a poor play of his proteges and argued with the referees. After Lisinac’s huge spike it was, for “Aussies”, an embarassing 8-19. Final score of 13-25 speaks for itself.

Another good start from the Serbs – this time in the 4th set (5-7). Probably the key moment of this period happened afterwards as Australia took three points in a row (8-7). The local duo Sanderson – Edgar supported by Mote kept “Aussies” up front while the third player who was just mentioned has sealed Serbian destiny in this set at 18-15 and finally, at 25-22.

Guess what? Serbia again had a solid start. In the tie-break, it had 1-3. A nervous Australian players gave the visitors 4-6. Edgar had a heart of a warrior while spiked for 10-9. Starović’s attempt went wide and a double block awarded “Aussies” with 13-10. It wasn’t over as hosts made an error in the field 13-12. A huge block by Guymer (15-12) set a joy for the fans in Melbourne!

FIVB Intercontinental Round / Pool A /

WL: Iranian coach – „I wish all my players to fight like Marouf“