The city of Apeldoorn will be playing host this coming September 7-9 to a second-round qualifier for the 2013 CEV Volleyball European Championship – Women, the first of two round robin weekends whereby the “orange” ladies will try to qualify for the event taking place next year in Germany and Switzerland. 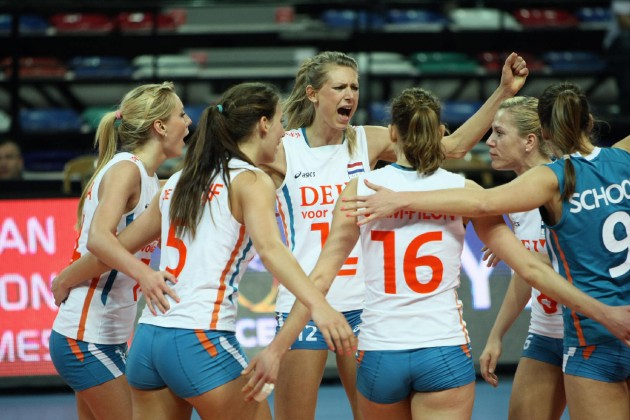 As the DOL was staged last October in Luxembourg, the Netherlands were assigned to Pool B together with Ukraine, Denmark and Greece. The group that finished fourth in this year’s CEV Volleyball European League thereby qualifying also for the next edition of the FIVB World Grand Prix looks like the pre-favorite of the Pool but will have to finish atop of the charts after the second weekend of action in Ukraine to seal their qualification for the 2013 EuroVolley. The runner-up will have a last call in May 2013 via a third qualification round that consists of home and away matches.

Head coach Gido Vermeulen recently announced a list of players that will have to be reduced to the 12 eventually retained for the European qualifier. “Our goal is to finish first in the group and I think we can fulfill this ambition. Denmark is quite evidently the weakest among our opponents. As for Greece, we have crossed our ways in the European League and scored four wins, so this is an opponent that we shall stand too. Ukraine is a country with a long tradition in Volleyball and a dangerous opponent. They have qualified for the 2011 European Championship, so they have the potential to make it there once more”.

The list of 17 players announced by Vermeulen includes also Kim Staelens and Manon Flier who enjoyed a break after the Olympic qualifier in Ankara and missed the European League campaign. The “Oranjes” will prepare for their home tournament via a series of friendly matches with Belgium and Bulgaria and at the end of this preparatory stage Vermeulen will shortlist the 12 players retained for the tournaments in Apeldoorn and in Yuzhny, Ukraine.