Noliko MAASEIK has added US American left-handed setter Kyle Caldwell this summer. Brecht Van Kerckhove is impressed. Mathias Valkiers and Kyle led the team to a victory against Arskas IZMIR in the 2013 CEV Volleyball Champions League. 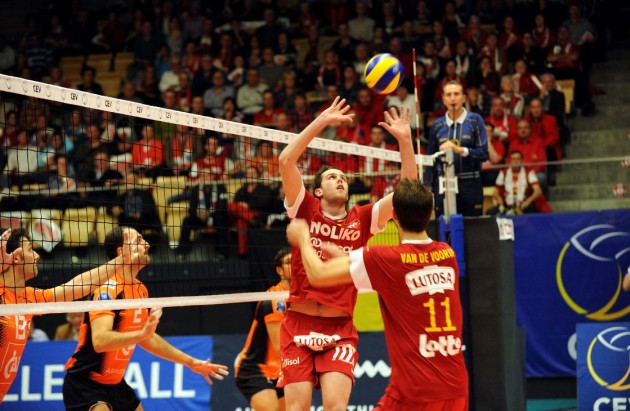 “I started playing Volleyball at the age of 13 and initially combined this with basketball, a real family tradition. My grandfather even played in the NBA and is a member of the NBA’s hall of fame. When I entered the college I decided to focus on Volleyball and became a member of the team of the University of California Los Angeles. Next step was playing for the USA team in the Pan-American Games. Noliko MAASEIK got to see a video, contacted my agent and offered me a contract. Through my teammates and professional Volleyball friends I found out that Noliko is a very good European team with an excellent reputation and for the 12th consecutive year participating in the prestigious CEV Volleyball Champions League” an enthusiastic Caldwell states.

Noliko coach Brecht Van Kerckhove also was impressed by the video. “It was clear that this was a player with a great potential, the kind of player that we like working with here in Maaseik”.

Kyle Caldwell moved to Belgium in August and started his career as a professional Volleyball player. His impressions after the first three months are very positive. “Reality goes beyond my expectations, this club is very professional and very well structured, everything is taken care of and you only have to focus on Volleyball. The team roster is balanced and all players are exchangeable which is important because we all like to play. I’m also impressed by the environment, Maaseik is a nice town, very clean and people living here are friendly and remarkably they all known the players of Noliko” Kyle states.

Setters Mathias Valkiers and Kyle Caldwell lead the team to an already impressive season’s record with a 3-1 victory in Turkey against Arkas IZMIR in the 3rd leg of the main phase of the 2013 CEV Volleyball Champions League as their most recent success.