Explosive Japan methodically tore the Poland’s defence into shreds to stun the European champions in comfortable straight sets 25-15 25-19 25-16 in their Pool B encounter of the Girls’ U18 World Championship at the Liptapanlop Hall on Monday. 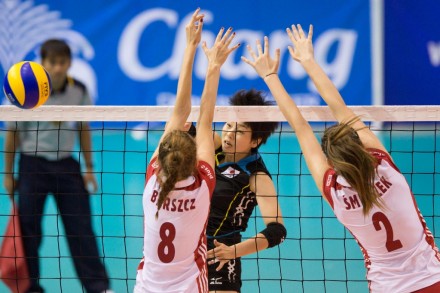 In this last preliminary match of world No.6 Poland, hard-hitting Mizuki Yanagita became the top score of Japan after collecting 16 points including 14 kills for the team. Malgorzata Barszxz led Poland with eight points.

World No. 9 Japan mixed the splendid offensive combination of devastating cross-court attacks by Mizuki Yanagita and Miku Benoki with the effective blocking from Haruka Maruo and Yuka Onodera to win the first set without much trouble 25-15.

Despite a determined challenge, Poland, powered by Malgorzata Smieszek and Malgorzata Barszcz, still found it difficult to make their mark asJapan continued their incredible power and speed to win the second set 25-19.

In the last set, as Japan took the commanding 23-15 lead, they rested their best players and instead fielded several substitutions including Kaori Mori and Misaki Shirai. Japan captured the set 25-16 and the easy match.

WCHY W: Hosts back to winning ways against Puerto Rico