POL M: President of Skra – “I should have reacted earlier…”

There is no doubt - This season was not a success for PGE Skra Belchatow. 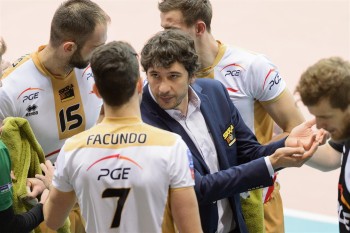 The Polish powerhouse failed to reach the Final Four of the CEV Champions League, while they dropped a ticket for the PlusLiga Finals in the very last round of the Regular Season. On top of that, they have parted ways with head coach Miguel Falasca, after it was discovered that the atmosphere inside the team is far from good.

At the end, club’s president Konrad Piechocki stated that he should have parted ways with Miguel Falasca earlier…

“I am aware of the fact that I made a mistake and I am not afraid to admit it. I have watched literally every game in this season and I have seen that the players are not a true team. For several times I have tried to intervene, while before the final stage of the Polish Cup it finally looked that the squad is back together. However, it did not work in the long run. And, everything what happened after the match against Zenit Kazan only tipped the scales,” said Piechocki for sport.pl and then denied the rumors that Mariusz Wlazly has a different treatment inside the club than the other players.

“I am the president of the club and not the manager of Mariusz. I do not depend only on individual performance of one player, but on the performance of the entire team. Of course that Mariusz is very important player for us, he is perhaps the most important figure in the history of the club, but please note that Miguel Falasca is also a very important part of our history. He played for Skra for four years, while he was a team head coach for almost three more. It was not easy to decide to dismiss the man with whom I have worked for seven years,” concluded Piechocki.

GRE M: Cepeda will play in Game 4, Thessaloniki is ready for another volleyball spectacle (VIDEO)

ITA M: The moment when PalaEvangelisti “exploded” – Atanasijević with huge 1-on-1 block on Čebulj (VIDEO)

Miguel is foreigner and he will always be!!! Wlazly NO!!!