WL: Russia too cold for Serbia even in the summer

Russia has celebrated in the third mutual match against Serbia at Pool B of the FIVB World League 2014. In contrast to the first weekend when the teams have met in Niš, today Voronkov’s guys were the strongest squad. 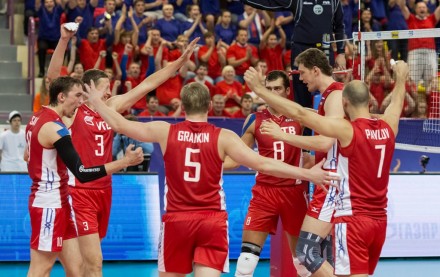 In an extremely interesting first set when the Russia had 20-16 on it’s side, Serbia turned the tides of the game. With good service of the Serbian captain Stanković and good play of Lisinac on the net, Serbian team turned result on 20-22. After 22-22 and 23-23, Atanasijević scored for set point 23-24 but the uncertainty continued. Russia took first set point on 28-27 but with many mistakes in service and mistakes of Biryukov in attack, Serbia again came close to victory (29-30 and 32-33). Savin scored the third set point for Russia (34-33) but Serbian opposite equalized on 34-34. The last point in the set took Russia thanks to the mistake of Atanasijević – 37-35.

After the first set Russia became more powerful. Easier than everybody expected they took the lead 17-9 and 21-11; it was clear that the hosts will lead 2-0 in sets. Miloš Nikić served in out for 25-15.

The third set was a copy of the second. On the court, there was only one team and hosts took all three points from this match.

Did you watch first set? Wow…it was gooooood….I am sorry because of Serbia because they have them in the first set…and later…..to shame…Atanasijevic made 27 points but all important balls he threw out….Middle blocker were the best in the team…