WC M: Superb display by USA, no mercy for Italy!

The national volleyball team of USA defeated Italy in straight sets 25:18, 25:23, 29:27 and remained unbeaten after four matches at the FIVB World Cup in Japan! 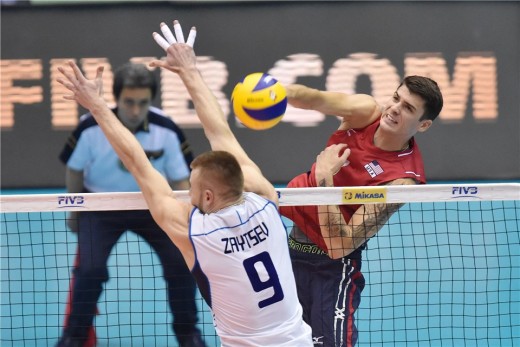 It was a superb display by the USA while Italy were not at the top level to face such a team as USA. Juantorena was not in the mood during this game (3 points), while Zaytsev couldn’t do anything only by himself. He needed help in this clash of titans…

Ivan Zaytsev opened match with a strong spike and after a few point rallies they had 4-2 lead. The U.S. Team came back with setting up a good defense! Block were working perfectly fine and they created 6-1 scoring run for 8-5 lead at the first TTO.

Speraw’s side kept the lead and at the second TTO they had 16-11 lead. Anderson were powerful from the service line…The Italians tried to make comeback but U.S. players even increased the advantage and took the first set, 25-18!

After amazing block by Simone Gianelli in the second set, Italy went to first TTO with 8-4 lead! The block of the Italians were perfectly fine! That was the reason of keeping the advantage.

It was good decision by Speraw as his team later decreased the lead and with Anderson’s ace got two set points, 24:22! The first sent point had been saved by Zaytsev. Aaron Russell was at the right place at the right time and gave his team 2-0 advantage in sets.

In the third set the U.S. team were dominating. Juantorena’s very poor performance made Blengini to replace him with Antonov. Afterwards, Zaytsev left the court and asked for medical treatment. Luckily for Italy, he came back at the result 12:9 for USA.

Oleg Antonov brought some new energy to Italy! After his serves, Blengini’s side made 5-0 scoring run for 14-13 lead!

At the result 21:20 for Italy, Blengini asked for challenge and he was right! This move gave Italy two points of advantage. After Speraw’s time out, USA came back and earned first match point 24-23!

Gianneli managed to save it. Lanza’s mistake gave new match point to USA and Zaytsev had to save it, 25:25! Simone Gianneli’s strong serve pushed Italy to the first set point but U.S. team saved it and later earned fourth match point! Aaron Russell was the man who decide the winner of the game! It was a great ace, 29-27!