After coming up essentially one set victory shy of qualifying for the 2016 Olympic Games at the FIVB World Cup earlier this month, the U.S. Women’s National Team will embark on its second chance to qualify for the Olympics during the NORCECA Women’s Continental Championship being held September 27 to October 2 in Mexico. 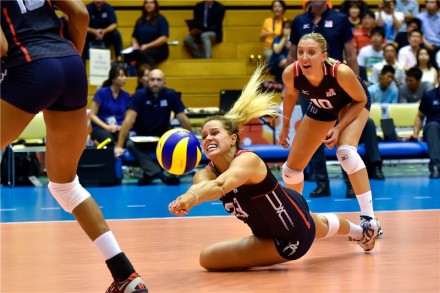 “We learned some valuable lessons during the World Cup several weeks ago, and plan to use that knowledge to make us better at the NORCECA Continental Championships next week in Mexico,” said head coach Karch Charles Kiraly said. “This is part of a journey filled with challenges, including the process of qualifying, all leading toward the Rio Olympic Games. Ultimately, the more challenges we learn to overcome and even to embrace, the better team we can become.”

So for the first step in the second chance to qualify for the Olympics, Team USA is placed in Pool A of the NORCECA Championship. The Americans open the tournament against Costa Rica on Sept. 27, followed by Canada on Sept. 28 and Cuba on Sept. 29. The winner of Pool A and Pool B (Dominican Republic, Mexico, Puerto Rico and Trinidad & Tobago) advance directly to the semifinals on Oct. 1 while the second- and third-place teams in each pool compete in crossover quarterfinals on Sept. 30. The medal round and final classification match are set for Oct. 2.