The final act of the CEV Volleyball Champions League, will be played in Istanbul. Galatasaray Daikin look forward to welcoming the winners of the Playoffs 6 for the final showdown that is coming up on March 9-10 at “Burhan Felek” Volleyball Hall. Massimo Barbolini's team will meet there Vakifbank or Eczacibasi VitrA. 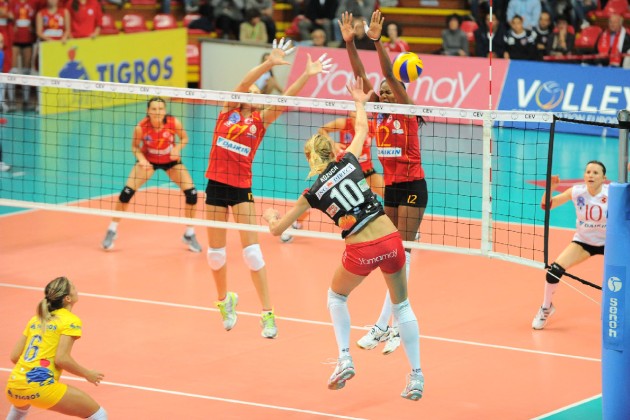 Though that side is a rookie in the CEV Volleyball Champions League, the club has assembled some of the most decorated Volleyball stars out there and a world-class coach, Italy’s Massimo Barbolini, to get the maximum result right by their first appearance in the competition.

The preparations for the final four are running at full speed there in Istanbul as it was confirmed by team manager Orkun Darnel and local press director Tugce Erdogan who visited on Monday the CEV headquarters in Luxembourg City to provide CEV President André Meyer and ECC President Riet Ooms with an update and general overview of their plans.

The final four is being extensively promoted there in Istanbul also by exploiting the unique exposure that is provided by the other divisions of one of the world’s most successful sports clubs. This past weekend as Galatasaray played Besiktas at Türk Telekom Arena, 52’650 fans got to see not only the debut of Dutch superstar Wesley Sneijder but also a promotional clip specifically prepared to start drawing attention to that major highlight of the Volleyball season.

Flyers have been distributed at the GS stores and a special Volleyball corner was set up there at Türk Telekom Arena to get additional exposure for the Volleyball team captained by Italian setter Eleonora Lo Bianco. One of Turkey’s Volleyball stars, Neriman Özsoy, is portrayed on a special tunnel whereby the supporters find their way from the stop of the metro to that arena that has hosted the home matches of Galatasaray football club for the past 49 years.

The design and concept of the official website specifically worked out for the final four is also being finalized but the tournament will be massively promoted also via the social media. Just to get an idea of the terrific potential of these tools, the official Facebook account of Galatasaray is being followed by 7.8 million users, a figure that can be compared to only a very few teams that are starring in the US professional leagues (NBA, NHL, etc.).

Galatasaray TV – the official TV channel of the hosting club – is planning to film extraordinary footage to accompany the home heroines along the way to the final four as well as to review the weekend once the winner of the 2013 CEV Volleyball Champions League will be known.

A real legend of Turkey’s soccer, i.e. the current mentor of Galatasaray, Fatih Terim, has also expressed his interest in attending – depending on the schedule of the UEFA Champions League fixture with Schalke 04 – the matches whereby the team coached by Massimo Barbolini will try to turn into Turkey’s third side – after Vakifbank and archrival Fenerbahce – able to claim that much desired crown.

Galatasaray will be joined for that memorable weekend by another Turkish team, i.e. the winner of the Playoffs 6 clash starring Vakifbank and Eczacibasi VitrA, plus two more among Europe’s Volleyball heavyweights, so everything is set for a unique Volleyball “fiesta” that shall be rounded out by a gala dinner taking place in the marvelous scenario of Galatasaray Island on the Bosphorus.