TRENTINO Planetwin365 makes it to the Playoffs 6 of the 2012 CEV Volleyball Champions League after defeating the Belgians of Noliko MAASEIK 3:1 at PalaTrento (25-20, 17-25, 25-17, 25-21) thereby confirming the result from the previous round played last week. 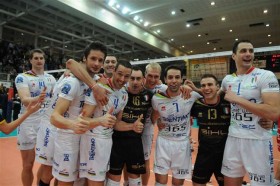 The Czech opposite was named MVP of the match with 62% of efficiency in attack (he chartered 20 points including 3 aces). On the other side were remarkable the performances of both middle blockers (Pieter Verhees and Simon Van de Voorde, with 14 and 13 points respectively) and of the Cameroonian spiker Nathan Wounembaina, who clipped 14 points for his side.
“Being among the top six teams in Europe is not enough for us, we want to go ahead. In the first and second set we did not play at our usual level, we lost concentration and only thanks to some good serves of Raphael we got back on track” stated local head coach Radostin Stoytchev.
“We played very good for two sets, we had some problems in containing the attacks of Juantorena and it is a matter of fact that TRENTINO is the best team in the world, so I can say that I am satisfied because my team is young and we just need to train and acquire experience” said the head coach of Noliko MAASEIK Vital Heynen.