Beograd, Serbia, February 28, 2012. Crvena Zvezda will be playing this Thursday, March 1, Turkey’s Galatasaray ISTANBUL for the return match of the Challenge Round that will be determining the semifinalists of the 2012 CEV Volleyball Cup – Women. 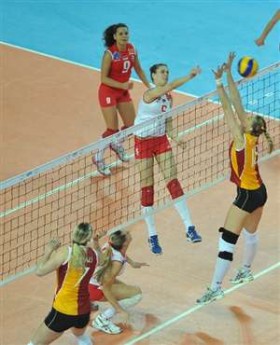 Serbia’s champions suffered a defeat in straight sets last week in Istanbul and will hence first try to seize that game before possibly going for the golden set.

Galatasaray easily downed the girls in red and white jerseys last week but team captain Ana Bjelica feels like her side will be playing much better on Thursday at “Sumice” sports hall.

“They have a very good and experienced team, so we have to start strong and be always brave to have a chance to win” she says.

Middle blocker Mina Popovic (pictured) adds that Crvena Zvezda was sidelined by too many mistakes last week in Turkey.

“We have to avoid this and profit from the advantage of playing at home in front of our fans” she stresses.