Scotland and Cyprus preserved their immaculate match records after the second day of action at the final round of the 2012 CEV Junior Volleyball European Championship – Small Countries Division to set up a dogfight meeting on Thursday for first place overall. 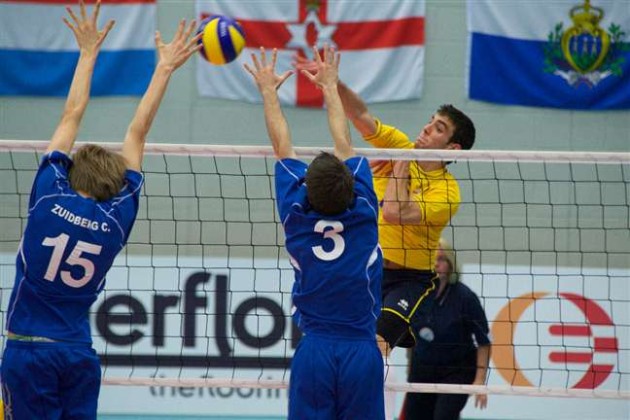 Cyprus were stunned by the speed and power of opponents Luxembourg as the Lux boys sped to a first set 25-18 victory behind eight winning hits from wing spiker Kamil Rychlicki.

Cyprus coach Kostas Delikostas shook up his pack, withdrawing Christos Prodromou for Matheos Averkiou, and changing the serving targets to pin the Luxembourg attackers in place.

Although Averkiou did not make a single attack in the game, he was the dominant factor at the net with three kill blocks and a host of control touches, while the changed serving tactic enabled Cyprus to use their own wing spikers Konstantinos Yiannakkos and Giorgios Moschovakis at ease.

Coach Delikostas praised the patience of his team in the post-match interview, and was of the opinion that his team is peaking at just the right time, having spent the last 18 months learning to play.

Luxembourg coach Dieter Scholl commented that many of the errors in the game and the change in fortunes reflected the youth of the players and fully expected his team to learn from the experience.

Scotland matched up with San Marino, and despite a 17 kill game from San Marino captain Lorenzo Benvenuti, the hosts were able to show their strength over four sets, the key change in the game coming in the middle of the fourth set when Ross McKelvie entered for the first time in the Championship and scored six kills from seven attempts, playing for the first time ever as a diagonal.

Scotland coach Thomas Dowens praised the contribution of the replacement player, but reserved a special mention for the setter Grant Gwynne, whom he felt was the decisive player in the match result.

The third match of the day was a clear-cut victory for Northern Ireland over Ireland, securing the first points of the tournament for the Ulstermen, who now have San Marino in their sights in the battle for place 4.

GRE: Iraklis Thessaloniki and Pamvochaikos even in series