CEV CL: Top clash of the week in Baku as Azerrail takes on Vakifbank

Baku, Azerbaijan, December 12, 2011. The players of Azerrail BAKU will be looking this coming Wednesday for their third consecutive win in the group stage of the 2012 CEV Volleyball Champions League as they play host to reigning champions Vakifbank TTelekom ISTANBUL at “Sarhadchi Sports Palace” in Azerbaijan’s capital city. 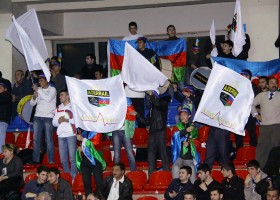 After missing Europe’s most elitist competition for 4 years Azerrail made a sensational comeback by beating 2004 Tomis CONSTANTA of Romania in straight sets and Italy’s heavyweight Volley BERGAMO 3:1.

Vakifbank is also on a good track to repeat last year’s exploit as the players around head coach Giovanni Guidetti have also scored two wins without losing any set so far.

This game is extremely important as the winner will almost surely book a spot for the next stage of the competition; while Vakifbank is a very experienced group, the Azeri girls have already demonstrated that they are not afraid of any competitor.

It will be a very special evening for the head coach of Azerrail, Faig Garayev, as he used to mentor Vakifbank back in the ‘90s.

“Turkish people are very close to us and there is definitely a kind of brotherhood between our nations” he says.

“We always support them if they are not playing against Azerbaijan” he adds with a smile.

“It is going to be a tough game but we know we can go for the maximum result. Our head coach and some of our players know Turkish Volleyball very well and this will help us for the upcoming clash with Vakifbank” states team captain Oksana Parkhomenko.

MEVZA: Lost for the VCA

Turkey: Volleyball well represented in Turkey’s poll for “Athlete of the Year”