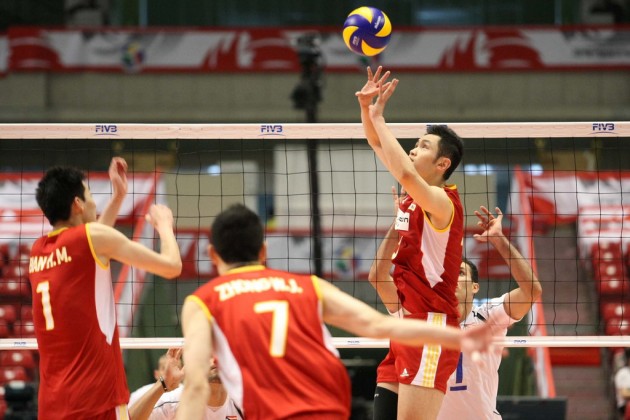 Zhang Chen sparked China with a match-high 13 points, while Chen Ping contributed 10 in the triumph.

Puerto Rico was unable to handle the speed and power of 10th-ranked China, which seemed to turn it up a notch whenever they needed to.

Chen‘s block gave China a 5-4 lead in the first set. Fernando Morales sent a serve into the net and China was up 8-5 at the first TTO. Yuan Zhi‘s spike put China up 10-7.
Ezequiel Cruz crushed a spike to pull Puerto Rico within 12-10. Liang Chunlong made a quick spike off an option play for 15-12. China was on top 16-13 at the first TTO.
Juan Figueroa‘s spike pulled Puerto Rico within 18-16. China was in front 21-18 when Puerto Rico called a timeout. Roberto Muniz soared for a spike to move Puerto Rico within a point at 21-20 and China took a timeout. A service ace by Muniz equalized at 22-22. Yuan‘s spike gave China set point at 24-22. Cruz sent a serve long to give China the set at 25-22.
Yuan had six points in the set, while Muniz and Figueroa had five each.

Liang tomahawked a spike to spot China to a 5-1 lead in the third set. Chen‘s spike put China up 8-1 at the first TTO. Enrique Escalante served into the net for 11-4. Figueroa sent a spike long for 15-7 and a Chinese spike made it 16-7 at the second TTO. Another spike by Chen gave China a 10-point lead at 18-8. Chen‘s block made it 20-11 and China marched toward taking the match. A spike down the middle by Zhong Weijun put China within two points of victory at 23-14. Liang closed out the match with a quick spike.

China takes on Iran in their next match on Saturday, while Puerto Rico faces Australia.