CEV CL: Atom Trefl SOPOT does well at the end of key set 2 and scores away win in Czech Republic

Prostejov, Czech Republic, December 21, 2011. VK Modranska PROSTEJOV suffered a 0:3 home defeat tonight to Poland’s Atom Trefl SOPOT (21-25, 25-27, 17-25) to remain at the bottom of the standings in Pool C of the 2012 CEV Volleyball Champions League – Women while the rookie from the Baltic Sea is basically sure to make it out of the Pool play while participating for the first time in Europe’s most elitist competition. 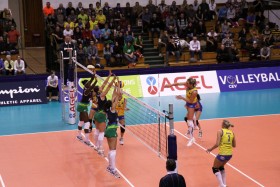 The match was basically decided at the end of the first and second set.

The same scenario unfolded in the second set where the Czechs scored 6 in a row to storm back from 16:19 to 21:19 but they missed three set balls before their rivals closed that dramatic section of the game with the score of 25-27.

The third set was fully under control of Atom Trefl that scored their second win in less than 7 days over the Czech national champions.

“I am very happy with this win; we fought with glowing hearts and we needed three points from this game, so we are happy with the result” says the team captain of SOPOT, Katarzyna Konieczna.

“Tonight we played a little better than we did last week in Poland and it is a pity that we lost the second set that way. Actually we missed just one point to go for the 1:1. There were many ups and downs and of course we are disappointed because we needed a win” says home leader Solange Pereira Soares.

“After losing the second set we simply gave up and the third set was fully controlled by our rivals. Anyway I think we did better than last week in Sopot but it is terrible that we did not use our chances in the second set because the game would have developed in a totally different way. However, I have to admit that the guests were stronger than us especially in some key moments”.

“This was an extremely important match to pave our way to the next stage of the competition and I am more than happy that we won” says Atom Trefl coach Alessandro Chiappini.

“We still had some problems in reception so we have to improve for the next games. Our serving but also our general play were good tonight and I have to thank the girls for this” he stresses.