Make sure to contact your floater dead center. If you hit it more toward the top of the ball, it will travel in a predictable arc, making it easy to pass. Hitting it too far underneath may cause it to sail out of bounds. So concentrate on the point of contact, and you'll find your floater is more effective. WorldofVolley brings you the latest volleyball news. 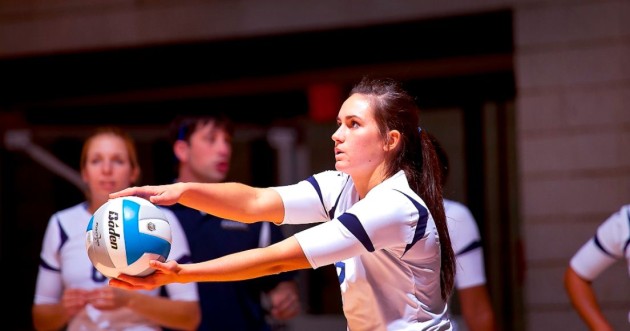 Middle blockers rule the net. They need to be warriors, constantly in motion, relentlessly aggressive on offense and defense.

To be an effective CF (Center Front), you must love to work hard and be involved in every play. You’re like the shot blocker in basketball. You have to dominate the net, and make it your own, make opposing hitters think about what they’re doing, change their shots, throw off their game.

1-Block head-to-head, but remember, the angle shot is easiest to hit, so at the lower levels of play, especially, you’ll see 90% angle hits. Shut down the angle, and then see what else your opponent can do. Many times, there’s nothing they can do, and will stop hiting. Then you own them! They’re no longer a factor.

Calling Touch on The Other Team

One of the most frustrating things for hitters is to go up, blast away, have the hit go off opponent’s fingers and out of bounds, only to discover no one saw the touch. Here’s a way to get a few calls you might not get otherwise:

Simply call “touch” the instant you see them at the net. Oftentimes, the down official or linesperson will hear that and instantly signal a touch. If the ball is close to the net, it’s sometimes hard to know who actually called the touch, especially in a noisy gym.

How to keep blockers from getting used:

The outside blocking hand is always turned in toward the court to reduce wipe offs and force the ball back into the opponent’s count.

Here’s an effective strategy for neutralizing your opposing hitter:

Since 95% of all hitters hit mostly angle, assume that your opposing hitter will hit line … until they prove differently. Set up your block to take away the angle and stay there until they hit a line shot.

If they finally do hit line, DON’T automatically change your blocking stance. Instead, assume that line shot was an accident, caused by a poorly contacted ball. Only if they hit line a 2nd time in a fairly short time period will you adjust your block to begin guarding the line.

In an era when jump serving is all the rage, why would anyone bother to serve the floater anymore?

Here’s a 3rd reason:
Since the floater moves so slowly in the air, it’s often difficult for opponents to decide who has the ball. They have more time to think, and therefore, more time to make mistakes.

If a ball is either too high for you to pass or off to the side when you’re in the front row and you make the decision to allow it to go past (for passing by your backrow teammate), let them know!

Talk first, then OPEN UP, which means turning to the side, rather than ducking. I’ve seen many backrow players take balls squarely in the face when their front row teammate suddenly ducks.

So if you’re going to let it go, tell your teammates, and then open up, and do both in plenty of time for them to react.

Whenever you are called upon to pass, you must first get into position, which means getting the ball between your knees, and contacting it at about zipper level.

Then, you must bend your knees. Don’t bend at the waist. Bending at the knees allows you to keep your eyes up, so you can see what’s going on.

Once you’ve become proficient at getting your serve over, and you’re able to drop your serve into a particular area, you’re ready to begin serving smart. Here’s some tips on scoring more aces with your serves:

First, if you haven’t had a chance to scout a team ahead of time, look for the biggest kid on the team and serve them. It may sound cruel, and it’s a generalization, but the fact remains that the biggest player is often the poorest passer on the team. Try them first, and see if they can get the job done. If not, keep serving them. It’ll up your ace total.

Middle blockers rule the net. They need to be warriors, constantly in motion, relentlessly aggressive on offense and defense.

Wait an extra 1/2 second when blocking a back row attack. And make certain you have a good chance to get it, because your block may obscure the vision of your teammates, getting ready to dig in the back row.

Read more Did You Know? articles.

Check out our Fitness section every Saturday a new story! Tomorrow read about 10 Workout Secrets From the Pros.