The winner of eight Grand Slam events has been retired since 2006, but he will compete against John McEnroe, Michael Chang and Jim Courier in Friday night’s Acura Champions Cup at Honda Center. 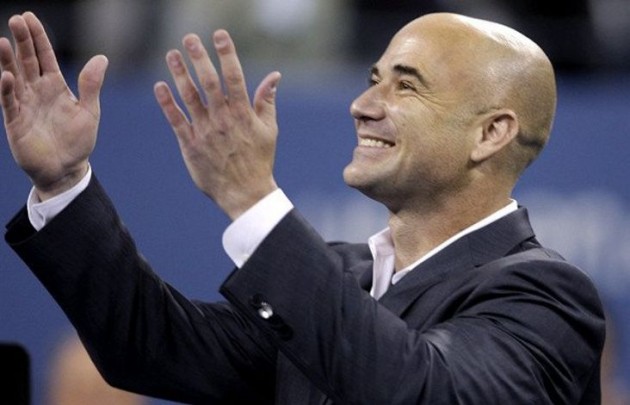 Residing in Las Vegas with his wife, tennis legend Steffi Graf, and their two children, Agassi has his hand in a number of charitable endeavors, such as his Andre Agassi Foundation for Education, Athletes for Hope and a charter school in Las Vegas, along with business and public speaking interests.

“I have a number of things going on. We have a philanthropic, for-profit venture that has $550 million to deploy across the nation from investors who don’t just want to give away their money, but effect social change. … I do a number of speaking engagements across the world. … I’ll be leaving for India in about nine days. And I stay close to tennis, never losing sight of what gave me this platform.”

Does your public speaking touch on the travails of life you documented in your book, “Open?”

“Yes, it’s about what I’ve done, what I’ve been through and how that applies to others. The heart of the challenges we all experience in life remains the same. Taking ownership of those challenges in our own search is something that can tie us all together.”

You referenced your own drug use in the book, and I wonder if you think tennis now does a good enough job in drug testing?

“I don’t know that you can ever do too much. You look toward the governing bodies to protect the integrity of the sport, and I believe the ATP and ITF have been ahead of the curve in setting the bar high. I had 20 urine, eight blood and three out-of-competition tests when I played. Now, it’s stricter. Players have to list their whereabouts. They know there’s a high priority on being clean, with WADA [World Anti-Doping Agency] in there for third-party oversight. I’m proud of where we are.”

What do you think would be the performance-enhancer of choice in tennis?

“The greatest asset you can have is rehabilitating, recovery. It’s not going to serve you well to be a body builder type. But the things that minimize the effects of work and injuries.”

The departure of yourself and Pete Sampras has left such an obvious void of great American males in tennis. Who’s the next great one? Are there any?

“The standard that was set by the number of guys not only in the era of Pete, myself, Jim and Michael and those right before that was so high … so many titles, that when you get an Andy Roddick to win one U.S. Open … that’s great, but if he doesn’t continue with more, that’s considered a disappointment. I think a guy like [John] Isner can do a lot because of his size.”

“Powerful game, a guy with room to get better. A big guy who covers the court well with serious power who can still learn to maximize his size and power.”

Is U.S. Tennis’ development program any good? It’s been around a long time, and hasn’t really produced anyone.

“The short-court 10-and-under program is a step. Tennis occupies an interesting place in sports in regard to children’s participation. In baseball and soccer, a child grows up playing, but there’s a huge drop-off after age 12. Tennis is the exact opposite. But we have a sport that doesn’t lend itself to growing up in the sport. So if we can find those ways to get a racquet in kids’ hands, we will see better progress.”

Are your kids playing?

“My daughter (9) plays a couple times a week, just having fun. My son (11) is 100% into baseball. After playing in L.A., I’ll be going to his tournament in Lake Havasu with a couple doubleheaders each day. My daughter does a great job playing, but it’s not her entire direction. She’s serious about other things. There’s more to learn than tennis. It’s a lot of fun being out there with her.”

What do you get out of these exhibitions like Friday’s? Some revenge at play?

“Each of us have our different points. The broad picture is just staying connected with the sport, and the format lends itself well to that. It’s a nice way to engage with fans you might never have played in front of before. Like being in Denver [on Thursday].” “You’re out to create some nostalgia, but can still hit the ball well. The bar is set low regarding our skill, but I’ll occasionally hit one and think, ‘I can remember that shot paid a lot of bills.’ There’s not the same type of will to win, or the same disappointment in loss. What you do is push yourself toward those little nooks and crannies, of getting back in shape, experiencing the nerves of making a good match, set or point. It’s a level of competitiveness I still enjoy.”

Read news from our Did you know? section, every Friday a new story, tomorrow read about BRA W: Sheilla spends Christmas with family

Bad boy turned into a politician –...