Lives and Times of Martina Navratilova

Born in Czechoslovakia in 1956, Martina Navratilova began playing tennis at a young age, and was one of the top female tennis players in the world in the late 1970s and early '80s. Later in life, she authored a series of fiction books and was active in the gay rights movement. 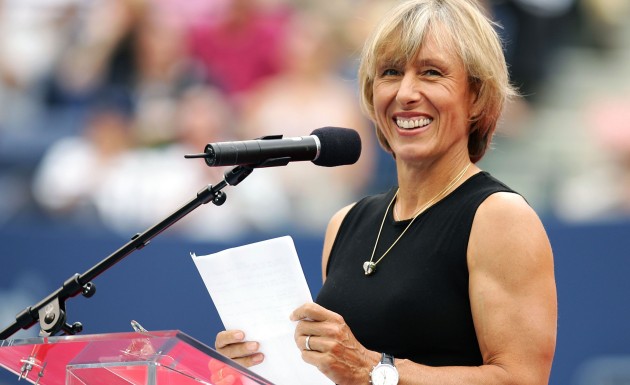 The most dominant female tennis player in the late 1970s and early 1980s, Martina Navratilova was born as Martina Subertova on October 18, 1956 in Prague, Czechoslovakia (now known as the Czech Republic). Her parents divorced when she was 3, and Navratilova and her mother, Jana, relocated from a ski lodge in the Krkonose Mountains for a new life just outside of Prague. As a result, Navratilova never grew close to her father, Miroslav Subert, a complicated man who suffered from depression and later killed himself after the demise of his second marriage.

In 1962, Navratilova’s mother remarried, to a man named Miroslav Navrátil. Navratilova eventually took her stepfather’s last name, tweaking it slightly by adding a feminine “ova” at the end. Navratilova and her new father grew close, with Miroslav becoming her first tennis coach.

The game was certainly in Navratilova’s blood. Her grandmother had been an international player who had upset Vera Sukova, a 1962 Wimbledon finalist, in a national tournament. Navratilova’s own tennis instincts were coupled with a passion for improvement. At the age of 4, she was hitting tennis balls off of a cement wall. By age 7, she was playing regularly, working with Miroslav and spending hours on the court each day, working on her strokes and footwork.

At age 9, Navratilova began taking lessons from Czech champion George Parma, who further refined the young player’s game. At age 15, she won the Czech national championship. In 1973, at 16, she turned pro and began competing in the United States.

Navratilova knew that staying in her home country might limit her chances on the professional circuit. With Czechoslovakia squarely under Soviet control, 18-year-old Navratilova defected to the United States at the 1975 U.S. Open. The decision meant she’d be cut off from her family for years, but it also set her career up for an unprecedented level of success. In 1978, she won her first Grand Slam tournament with a straight-set victory over American Chris Evert at Wimbledon.

Navratilova defended her Wimbledon title the following year, once again beating Evert in the finals, and then won a third Grand Slam victory at the 1981 Australian Open. By the early 1980s, Navratilova was the most dominant player in women’s tennis.

In 1982, Navratilova captured both the Wimbledon and French Open crowns, and would go on to lose only six matches from 1982 to 1984. In all, she won 18 Grand Slam singles titles, 31 Grand Slam women’s doubles championships and 10 Grand Slam mixed doubles. Her greatest success came at Wimbledon, where she advanced to 12 singles finals, winning nine titles. Navratilova retired from singles play in 1994, but continued to play in doubles matches.

In 2003, she won mixed doubles championship at Wimbledon. Three years later, she repeated the accomplishment with a win at the U.S. Open.

Coupled with Navratilova’s on-court success came her openness about her sexual orientation. “I never thought there was anything strange about being gay,” she wrote in her 1985 autobiography, The Lives and Times of Martina Navratilova.

In April 2010, Navratilova revealed that she had breast cancer. After six months of treatment, she became cancer-free.

When not playing tennis, Navratilova is involved with various charities that benefit animal rights, underprivileged children, and gay rights. She participated in a lawsuit against Amendment 2, a 1992 ballot proposition in Colorado designed to deny gays and lesbians legal protection from discrimination  In 1993, she spoke before the March on Washington for Lesbian, Gay and Bi Equal Rights and Liberation.

In 2000, she was the recipient of National Equality Award from the Human Rights Campaign, the nation’s largest gay and lesbian activist/lobbying group.

A vegetarian, Navratilova appeared in ad campaigns for People for the Ethical Treatment of Animals. In an April 2006 interview, however, she said she had recently begun eating fish again because she found it hard to get enough protein while on the road; which would make her a pescetarian not a vegetarian; nevertheless in 2008 she described herself as vegetarian.

She has spoken out on a number of volatile political issues, including tort/litigation reform, but perhaps her most consistent theme—aside from gay and lesbian rights—has been her unstinting opposition to Communism, and unrelenting opposition to the former Eastern Bloc power structure that she believes compelled her to flee her native Czechoslovakia. She has denounced the Soviet Union’s control over Czechoslovakia, maintaining that she refuses to speak Russian to this day because of the Soviet Union’s former hegemony over Eastern Europe.

“Whenever people go into politics and they try to say that Communism was a good thing, I say, ‘Go ahead and live in a Communist country then, if you think it’s so great.’ “

Navratilova was a guest on CNN’s Connie Chung Tonight show on July 17, 2002. During the show, Chung quoted a German newspaper which quoted Navratilova as saying: “The most absurd part of my escape from the unjust system is that I have exchanged one system that suppresses free opinion for another. The Republicans in the U.S. manipulate public opinion and sweep controversial issues under the table. It’s depressing. Decisions in America are based solely on the question of how much money will come out of it and not on the questions of how much health, morals or environment suffer as a result.“

Navratilova said that the remarks referred to what she perceived as a trend of centralization of government power and a loss of personal freedom. In the discussion that followed, Chung stated: “Can I be honest with you? I can tell you that when I read this, I have to tell you that I thought it was un-American, unpatriotic. I wanted to say, go back to Czechoslovakia. You know, if you don’t like it here, this a country that gave you so much, gave you the freedom to do what you want.“

Navratilova responded, “And I’m giving it back. This is why I speak out. When I see something that I don’t like, I’m going to speak out because you can do that here. And again, I feel there are too many things happening that are taking our rights away.“

Martina was quoted in 2007 as being ashamed of the US under President George W. Bush because unlike the communist regime in Czechoslovakia, Bush was elected.

In retirement, Navratilova hasn’t completely stayed out of the public eye. In March 2012, she made her debut on Dancing with the Stars. She’s also continued to remain active. Navratilova still regularly plays tennis and competes in triathlons. Additionally, she has served as a fitness ambassador for the American Association of Retired Persons.

Chech out our Did You Know? section, every Friday a new story! Tomorrow read about Contest for the Sportsman of the Year in Russia

ITA: Mini Volleyball Tournament in Ponte S. Giovanni “The city of Perugia along with Jack”